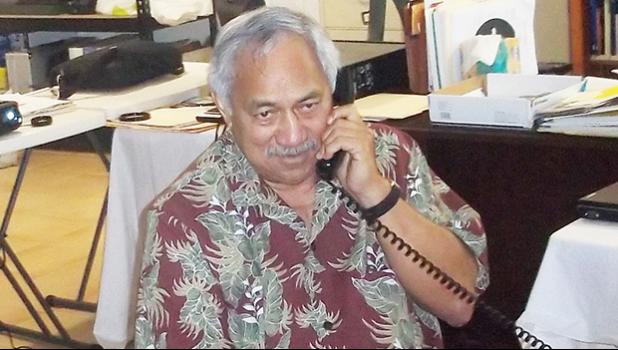 Faleomavaega “passed away peacefully at his home surrounded by family and a few close friends,” said Theresa Hunkin, who is Faleomavaega’s sister-in-law, in a brief phone interview not long after Faleomavaega passed away. “It was peaceful and beautiful in terms of his passing.”

HIs widow, Hinanui Hunkin, said yesterday afternoon from Provo that the “snow is softly falling outside” (already evening hours in Utah) and the family has gathered for prayer and song, and words of wisdom from the local bishop, before Faleomavaega’s remains were taken from their home to the waiting hearse.

“It is with pleasure that I say that life with Eni was far from dull. His spontaneous and generous heart was always evident, and bore fruit through which he was able to be an influence for good with all whom he came into contact,” Mrs. Hunkin said via email around 3p.m. yesterday (American Samoa local time) from Provo.

“His love for his people was unsurpassed and completely sincere, and he will, in his next life, continue to look after them,” she said.

“The children and I will miss him, but I know that he yet has work to do in his new life. I am so grateful for the trust that the people of American Samoa, for so many years, placed in him as their servant. I love and miss you, American Samoa,” she added.

Faleomavaega “had served the people and government of American Samoa faithfully for many years,” Lemanu said in a brief telephone interview late yesterday afternoon. He recalled Faleomavaega visiting military installations while he was serving in the US Armed Forces and had a chance to talk with him.

In a statement released after 4p.m. yesterday, the Governor’s Office announced Faleomavaega’s passing and that he died “peacefully” at his Provo home “after a lengthy illness.”

“The Congressman lived a life of service to his people, to American Samoa, and to the community of the Pacific,” it says.

“Governor Lolo and Cynthia Moliga, along with Lieutenant Governor Lemanu express their sincere condolences to Hinanui and Faleomavaega’s family on the passing of this great public servant who gave his life to serve the people and territory of American Samoa,” it says.

Faleomavaega, a Democrat, was unseated in the 2014 congressional race by current Congresswoman Aumua Amata, a Republican, after having served for 13 consecutive 2-yers terms as the Territory’s congressman or delegate-at-large.

At the time, his health was a major concern to local residents after he was medivaced to Honolulu in October of 2013 from complications, which he said was due to exposure to ‘Agent Orange’ while serving in the Vietnam War. He served in the US Army for three years.

However, his work in Washington, gained him a lot of respect from leaders throughout the Pacific and Asia. He would challenge the federal government over the years to do more to help the Pacific including neighboring Samoa, and his criticism of the U.S government surfaced in 2012 and 2013, when the Chinese government increased its financial support for Pacific countries.

In 1996, Faleomavaega participated in a boycott of an address before a joint session of Congress by French President Jacques Chirac. Just days before Chirac's speech, France conducted a series of nuclear tests at the Moruroa and Fangatauga atolls in the South Pacific, despite worldwide protests.

Based on his bio, available during election time, Faleomavaega started in Washington D.C. as an administrative assistance in 1973 to then A.U. Fuimaono, the territory’s first elected representative to the US House.

Then from 1975- 1981, he was staff counsel to the US House Committee on Interior and Insular Affairs before returning to American Samoa where he was a deputy attorney general in the Attorney General’s Office.

During the 1984 general election, Faleomavaega was the running mate to then candidate for governor, A.P. Lutali and the gubernatorial team of Lutali and Faleomavaega won. Faleomavaega served as lieutenant governor until 1989 when he entered the US House.

Funeral services are pending and the family plans to issue an official statement at a later time.

Faleomavega is survived by his wife, Hinanui, five children and 10 grandchildren.

Samoa News offers its sincere condolences to the family.