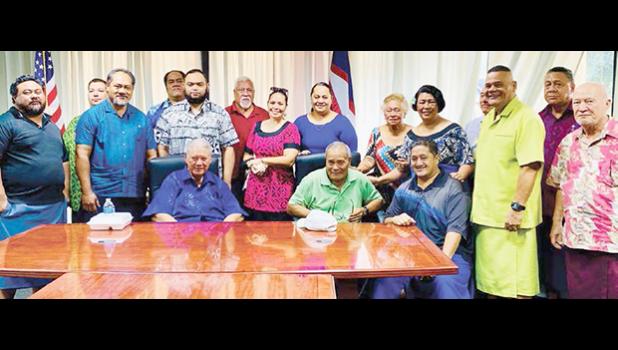 Pago Pago, AMERICAN SAMOA — Village council members and descendants of Fagatogo village were able to sit down with Governor Lolo Matalasi Moliga last week, to voice their concerns regarding the upgrades being made to the Fagatogo Pavilion — namely the installation of a concrete slab on the Malaeoletalu — which has triggered outcry and led to over a week of roadside protests spearheaded by Fagatogo resident Macy WooChing and members of the Faagata family.

According to a source who was at the meeting, the Fagatogo chiefs and residents are not opposed to beautifying the area. But they went to see Lolo because they wanted clarification for, among other things, why the village was not consulted prior to the concrete being laid.

Because the site was blocked off with a make-shift wall, residents were under the assumption that work was only being carried out on the structure, not the malae. It wasn’t until the wall was dismantled late last month that they realized what had happened to their beloved Malaeoletalu.

Samoa News understands that during a Fagatogo village council meeting, several residents voiced their disappointment with the fact that Lolo used — or abused — his executive power to ‘do what he wanted without first notifying the village.’

Some have described the move as both insulting and hurtful. “There was no transparency,” said one disgruntled chief. “We were never told.”

During the meeting between Lolo and the Fagatogo chiefs, the governor indicated that the ‘key’ to the newly renovated Pavilion facilities will be ‘presented’ to Fagatogo village, for use by its residents, for family activities, barbecues, picnics, get togethers, etc.

He essentially said the site would be given back to Fagatogo for its children to use. But some residents are not buying it, saying there is already a playground across the street — next to the Fagatogo Square — that is being used by the children of not only Fagatogo, but the whole island.

Following the meeting with the governor, Fagatogo chiefs assembled yet again. this time, tem- pers flared. Fagatogo resident Herman Thomsen was adamant about getting an answer on why the village was never informed. He said if this had happened years ago — when Fagatogo chiefs and non-ranking taule’ale’a, who had that warrior spirit (‘toa’), were young and in their prime — something would have been done already.

Punaoa Dan Tofiga also chimed in, saying it wouldn’t be hard to remove the concrete slab, and he would volunteer his equipment and machinery to do it. He said the only thing he — and the majority of Fagatogo — want to see is the Malaeoletalu being returned to what it used to be.

The Pavilion is one of three government projects that will be dedicated this morning. The other two are the Museum and the new DPS fitness center.