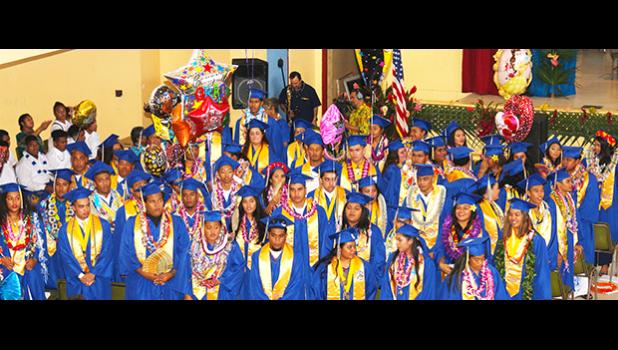 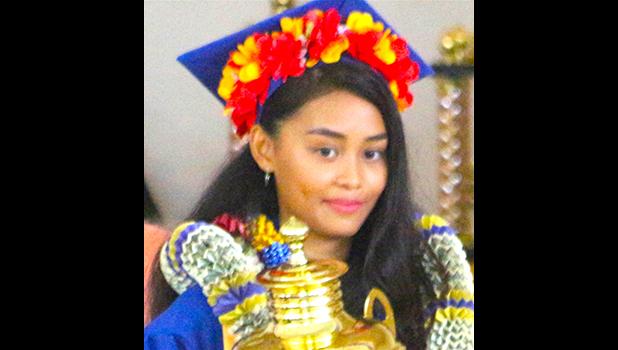 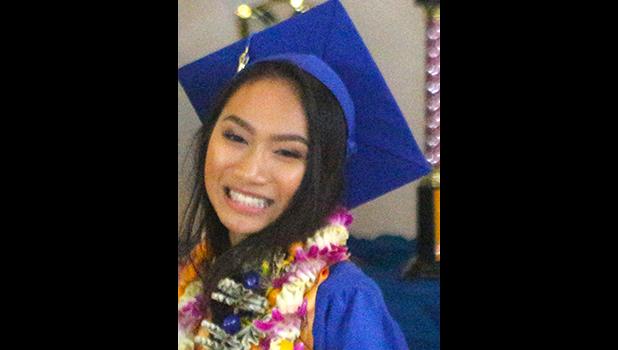 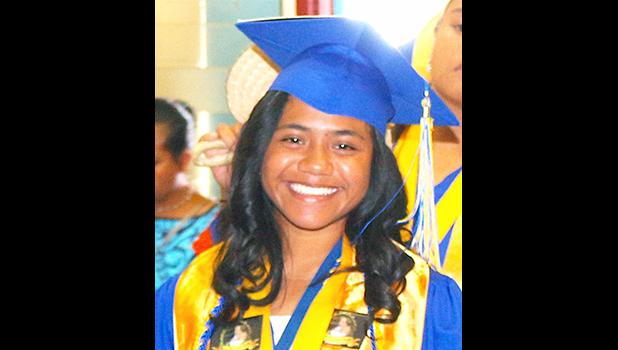 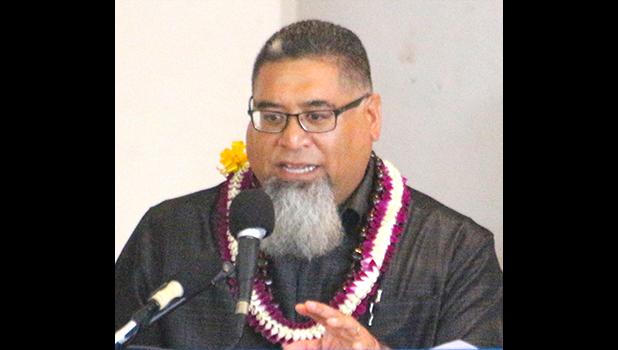 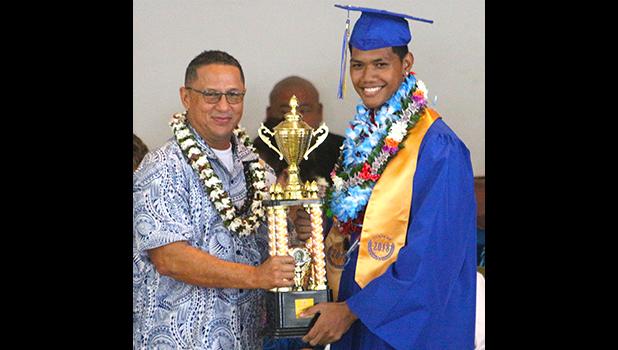 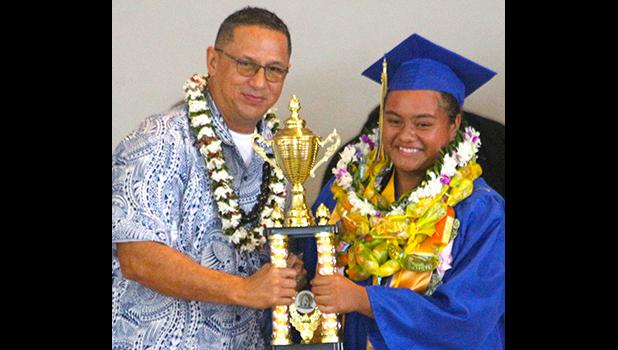 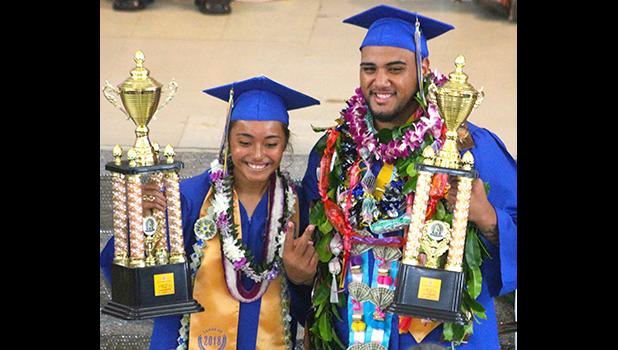 2018 Class theme: ‘The Power of One”
By
Tony Gasu
tony@samoanews.com

Pago Pago, AMERICAN SAMOA — This past Saturday morning, the Fatu-O-Aiga Catholic Diocese Hall was crowded with families and friends of Fa’asao Marist High School who came together to bear witness to the graduating 57 Cougars and Crusaders who bid their final farewell in a commencement ceremony with the theme — ‘The Power of One’.

Christopher King, who is a graduate of Marist Brothers High School, Class of 1984, is currently the Deputy Director of the Port Administration.

King emphasized to the graduates how life is like a jigsaw puzzle and the importance of finding their place in life. He noted the Power of One encompasses a spiritual meaning — “the power of being one with the Lord our God – God has given us everything we need to live a righteous life, we just need to reach out to him, to know him, to love him and to serve him. Always seek God’s wisdom and guidance. This is what my parents said to me on my graduation day, and this is the same thing I told my son when he graduated four years ago.”

King added “Maybe this is your calling in life, to be the power of one, to unite people to become a stronger force, but only you can answer that question, and I encourage you to pursue it. Just know that as individuals, you are the power of one and you have the power to determine when and where and how you fit best in this life.”

The Lt. Governor delivered a message also relating to the theme of the ceremony, noting “there’s a song that goes along with the theme — ‘Tasi le loto, tasi le fatu, tasi le aiga’ (One soul, one heart, one family), pointing to it taking ‘a village or a community to raise a child’.

He concluded, “Don’t waste the momentum, the momentum is there, your parents, your families, schools, teachers, staff, and your church are right behind you. There’s a saying in the Army … it says ‘Hurry up and wait’ and we’re very famous for that. We hurry up and we wait and wait for hours and hours to continue — Don’t do that, or you’re going to lose your support. Hurry up and keep going.”

Salutatorian for the Class of 2018, graduating with a G.P.A. of 3.96 is Fa’ananea Vimoto, who introduced the two Co-Valedictorians.

Co-Valedictorian graduating with a G.P.A. of 3.98 is Jan Trinity Francisco, who said during her remarks that of the Power of One, “one can mostly translate as a unified community. My community as Fa’asao Marist is filled with diverse people, each with unique gifts and talents to offer. And because of this, we each see the world from different perspectives.” She pointed to “the determination that we had as a class,” that allowed them to “unite as a group to utilize our time and resources to become the best class at Fa’asao Marist.”

She added, “Our achievements are not solely measured by the awards we receive, or the GPA’s we’ve earned, but what matters most, are the tactical qualities such as perseverance, respect and honesty that we’ve learned from our families, teachers and friends.”

The second Co-Valedictorian for the Class of 2018 for Fa’asao Marist — who also graduated with a G.P.A. of 3.98 — is Ira Lobetos who thanked everyone who supported her along her journey to success — “especially you Mom and Dad, for your never ending support and for investing in me and for being proud of me even at time when I feel like I could’ve done better – To my fellow graduates I urge you to give thanks to where thanks is due, after all, we didn’t make it to this day alone.”

She focused on the class’ journey, “the mindset that we’re all a family and we’ll always be a part of each other whether we like it or not.”

Lobetos said, “Wherever we go after this … I want to acknowledge the Crusader flame burning in you and take all the values that this school has instilled in us and use it to our advantage. Anyone and anything can inspire us, some feel the need to look far for inspiration but right now I see inspiration in each of you. Look beside you, behind you, in front of you, you do not have to look far to be inspired. All of us have the ability to make inspiring contributions to our community and to each other.”

The Salutatorian Award was donated by the Fa’asao Marist High School.

The General Excellence Award was donated by Mr. & Mrs. Koloi Tumanuvao in honor of the late US Army Sgt. Lui Tumanuvao Class of 1995. It was awarded to Danica Binuya.

The Religion Award donated by the Parent and Teacher Association of Fa’asao Marist High School was presented by PTA President Victor Langkilde and awarded to John Paselio and Josephine Iose.

The Male and Female Student Athlete of the Year Award donated by the Marist Fa’asao Parents and Teachers Association was presented by Victor Langkilde to Paul Fuimaono, and Susan Godinet.

The McDonalds $4,000 Scholarship Award was awarded to Catherin Bernabe.

The Rotary Club Award was awarded to Faustina Fetalaiga.

Ira Lobetos will be attending the American Samoa Community College majoring in Biology – while Fa’ananea Vimoto will also attend ASCC majoring in Nursing.