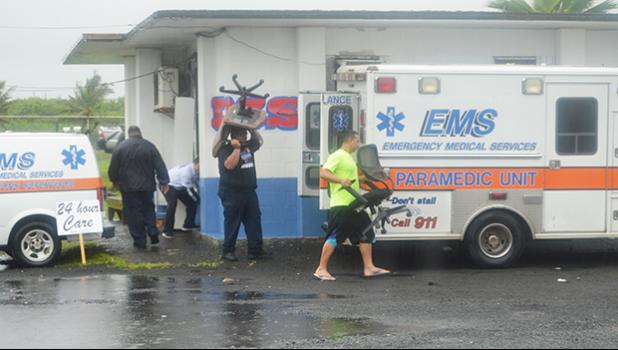 Pago Pago, AMERICAN SAMOA — EMS Tafuna is looking for a new home after DPS Commissioner Le’i Sonny Thompson ordered them to vacate the Tafuna Substation. Samoa News understands the decision was made at the cabinet level. Upon being notified, the CEO of the LBJ Hospital  informed the EMS Chief of the decision.

Efforts to obtain a comment from the commissioner about the issue have been unsuccessful.

According to a statement from EMS Chief Ifopo Galumalemana Avegalio, EMS was ordered to vacate the small building they share with the Territorial Correctional Facility (TCF) Trustees at the DPS Tafuna Substation on Friday, Apr. 6th.

“I requested time to find another location due to the busy Flag Day coverage and emergencies. On Tuesday, Apr. 10th, EMS was advised to vacate as soon as possible. The deputy commissioner and police chief said they need the space back,” Ifopo said.

He added, “We are not closing down our Tafuna Station, we have to find another location that can accommodate the 24/7 crews with adequate office space, locker-rooms, shower, and kitchen.”

Ifopo said the Tafuna EMS Station is the busiest station, with the majority of 911 calls for EMS coming in from the western district due to the population density. They also have a high volume of trauma calls, victims of assault, domestic violence, as well as being there for injured officers at the DPS-Tafuna Station.

“Unfortunately, due to the short notice, the Tafuna personnel and units may have to be recalled back to Fagaalu. This move will impede EMS’s ability to respond to medical emergencies/ 911 calls due to longer response time from the EMS Operations base in Fagaalu,” Ifopo said.

When asked who is helping them in pursuing the issue, the EMS chief said, “Our CEO, Faumuina Taufete’e J. Faumuina is concerned for the safety of our EMS crews and timely EMS response to 911 calls. Director of the Department of Health, Motusa T. Nua has offered to see what he can do to accommodate EMS with adequate space at the Tafuna Community Health Care Center which is already overcrowded.”

Samoa News received phone calls from several members of the community living in the western district, voicing their concerns and frustrations with the commissioner’s decision.

One of the callers was an elderly woman, who said the west side really needs quick response from EMS crews when something critical happens.

“What happens if I have stroke and I need help from EMS? Do I have to wait for more than twenty minutes for an EMS unit coming all the way from Fagaalu to assist me?” the caller asked.

“I don’t support the commissioner’s decision. The call to vacate the EMS from the police station in Tafuna is not right. People living on this side of the island deserve to have an EMS service for them in order to get a quick response in case of emergencies,” the elderly woman continued.

A young mother from Iliili contacted Samoa News yesterday and said it took over 30 minutes for an EMS unit to arrive at their home to pick up her daughter who was sick and needed to see the doctor immediately.

“It was very frustrating and at the same time sad because my daughter was in critical condition and needed to see a doctor right away. But when I asked the EMS crews why it took so long for them to arrive, they said they were responding from Fagaalu, because their Tafuna Station was closed last week,” she said.

The caller said EMS really needs a station on the west side of the island because that’s where most of the people live.