Embarrassing moment for American Samoa during roll call at DNC 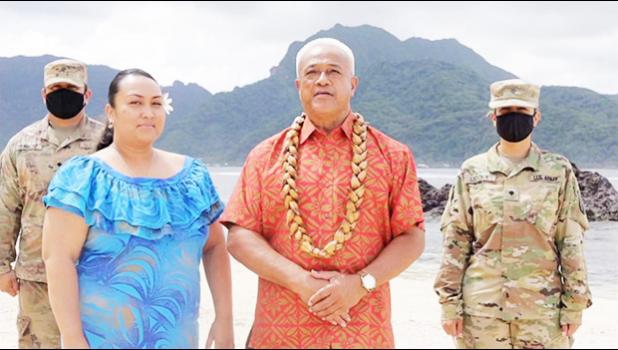 Local Dems say it was “not the best judgment on our part and a mistake”
By
Samoa News staff
reporters@samoanews.com

Pago Pago, AMERICAN SAMOA — U.S. soldiers appearing in uniform from American Samoa during the roll call at the Democratic National Convention was an ‘oversight’, according to a DNC official. ABC News was the first to report this, however it was quickly picked up by other national media because U.S. military personnel are not supposed to participate in political events while in uniform.

A Pentagon spokesman reaffirmed on Wednesday the policy of no political participation of uniformed personnel in response to an ABC News question about the incident.

Defense Department spokesman Lt. Col. Emanuel Ortiz in a prepared statement made later in the day said, “Wearing a uniform to a partisan political event like this is prohibited. The Army follows the Department of Defense’s longstanding and well-defined policy regarding political campaigns and elections to avoid the perception of DoD sponsorship, approval or endorsement of any political candidate, campaign or cause.”

Defense Department Directive 1344.10 forbids service members from participating in any partisan political campaign, or elections, candidate, cause, or issue while in uniform. Service members are allowed to engage in virtually any political activity out of uniform, but the activity cannot be perceived as being endorsed by the military.

In the video of the DNC roll call, Aliitama Sotoa, the chairman of the American Samoa Democratic Party, cast the territory’s 11 votes to candidate Joe Biden in the brief segment. Standing next to Sotoa was Petti Matila, who serves as an executive assistant at the American Samoa Department of Commerce. The soldiers did not speak and were not acknowledged, according to a Samoa News staff member who viewed the video.

The local Democratic committee ended their statement saying, “Our intent was to emphasize our commitment to the US military, as we have the highest per capita of enlisted service members in the United States. Now we realize that the setup for the roll call segment was not the best judgment on our part and a mistake.

“We express our deepest apologies to the soldiers and their families for our mistake. It was not intended to be a political statement — but our way to show our pride in the US Military and the importance of the US military in our lives and to honor our sons and daughters in the US Armed Services. We take full responsibility for our lack of judgment in this incident.”

The Democratic Party platform, which is set to be approved by party leaders at the convention, states that the party “will never use active duty soldiers as political props …” This comes after President Donald Trump in July walked across La Fayette Square to St. John’s Episcopal church for a political photo op accompanied by Army Gen. Mark Milley, the top military officer in the United States, who was in uniform. The General later said, "I should not have been there."