DOI's Domenech keynotes at 118th Flag Day: We are all Part of the American Family 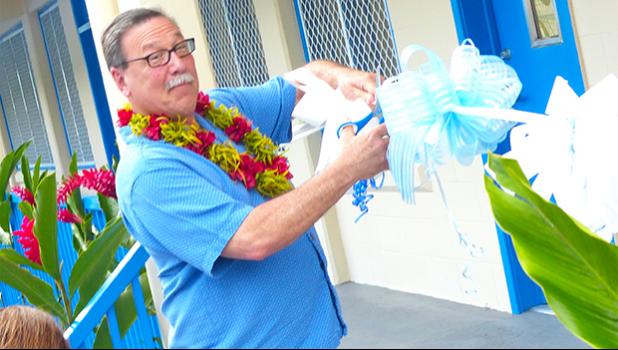 U.S. Interior Assistant Secretary for Insular and International Affairs, Douglas Domenech had the honor of cutting the ribbon on Thursday, April 19, 2018 for the official opening and dedication of a new two-story building at Peter Coleman Elementary School in Pago Pago. The project was paid for with Capital Improvement Project (CIP) money, from the Interior Department’s Office of Insular Affairs. At the ceremony, Public Works director Faleosina Voigt explained that construction costs amounted to $700,005 and $200,000 went towards the purchase of furnishings for the 8 classrooms in the new building. Nana's Construction was awarded the contract. Work started Sept. 22, 2017 and fully completed in early February, but the official dedication was delayed due to Tropical Storm Gita on Feb. 9th. The dedication ceremony was rescheduled for this month, in time for Domenech’s first visit to American Samoa. [photo: Leua Aiono Frost]

PAGO PAGO, AMERICAN SAMOA - U.S. Department of the Interior Assistant Secretary Insular and International Affairs Doug Domenech and Office of Insular Affairs Director Nik Pula are in American Samoa this week where they have joined in the festivities to celebrate the 118th anniversary of Flag Day.

The Assistant Secretary’s schedule began as soon as he arrived in American Samoa over the weekend with a special visit to the Manu’a Islands where he visited the Fitiuta and Faleasao elementary schools, the American Samoa Power Authority power plant and solar farm, Manu’a High School, the health dispensary, and the Faleasao wharf.

The Flag Day official ceremonies kicked off with a special ava ceremony hosted by the traditional leaders with the Assistant Secretary Domenech as a special guest.

The Assistant Secretary met separately with Governor Lolo and Lt. Governor Lemanu where he signed over $10.6 million in infrastructure funds to support infrastructure projects at the wharf, hospital, and schools in the territory.  The funding also included technical and maintenance assistance for training and youth conservation awareness programs.  He also had meetings with the Senate President Gaoteote, House Speaker Savali, Chief Justice Kruse, and other prominent government leaders.

The Assistant Secretary was briefed by Department of Homeland Security and FEMA leadership on the island on the status of recovery efforts and also toured some of the sites damaged by Cyclone Gita.

His trip to American Samoa concluded with more visits to other OIA-funded project sites on the island of Tutuila such as the LBJ Hospital, the new service wharf, and the shipyard.  He also visited the Starkist Cannery, a critical economic driver for the territory.

“The opportunity to visit American Samoa, meet with its leaders, tour the beautiful island, and experience first-hand the amazing hospitality and generosity of the people, only reinforces my commitment to strengthening relationships and friendships, and doing all I can to support the economic and social growth of American Samoa,” concluded the Assistant Secretary.

Details tomorrow on Ass't Secretary Domenech's Keynote as well as the governor's special remarks and other speakers at the celebration of today's American Samoa Flag Day 2018.