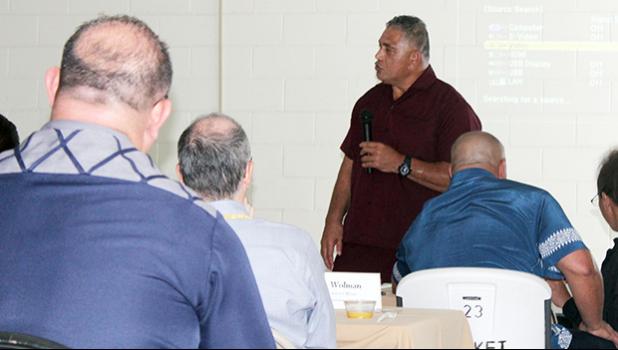 Pago Pago, AMERICAN SAMOA — One of the three challenges - and the top one - faced by the Department of Health since Gov. Lolo Matalasi Moliga issued the Nov. 13th emergency declaration in response to the measles outbreak in Samoa, is “border protection” at both the airport and seaport.

This is according to Health director Motusa Tuileama Nua during the department’s “Measles- Emergency Declaration Response” presentation at Monday’s cabinet meeting where he also claimed that some people are “falsifying documents” to circumvent local policy in order to enter the territory.

Since the emergency declaration, DoH has provided updates regarding entry policy, such as requiring all incoming travelers to show evidence of measles vaccination. DoH updates the policy every week, adding new requirements, with the latest dated Nov. 26th in which incoming travelers must show evidence of measles vaccination 14-days prior to arrival date.

Accompanying documents include vaccination records, and a form from Samoa’s Ministry of Health signed by Dr. Naseri or Dr. Thompsen.

Motusa told the cabinet meeting that every time there is a change in "policy" there are people who at the same time are able to "falsely documents" to enter and it has reached the point where the authorized "signature" is sold, and copies are made.

He said it’s like an "intel war" in which every time American Samoa changes its policy, there are those already working on ways to circumvent the system. He said DoH personnel are fully aware of these problems and continue to closely monitor all incoming passengers and the required documents — with the goal to protect the territory from the spread of measles.

The problem with altered health documents was also mentioned briefly by DoH deputy director of operation, Papali’i Marion Fitisemanu, who is currently overseeing the department’s surveillance at the Tafuna Airport and the Port of Pago Pago, dealing with border protection.

For the airport, since the emergency declaration became effective up to Dec. 1st, DoH recorded 1,625 outbound travelers to Samoa, while arrivals from Samoa totaled 1,699. Of the arriving passengers, 669 were placed under 14-day quarantine after their MMR shots were administered.

The quarantined passengers, for example, include local residents who departed the territory before the screening at the airport required arriving passengers to show proof of immunization.

According to DoH data, 31 travelers were denied entry - including travelers who arrived here without supporting health documents, such as the Minister of Health form signed by Dr. Naseri or Dr. Thompsen. Other travelers arrived with incorrect or suspicious documents, which couldn’t prove that the traveler had their MMR shots.

Papali’i said there are others who arrived with documents that could not be verified due to different signatures or different types of writing.  He said the policy has been in place for about 2 1/2 weeks. Up to this past Sunday, DoH was denying entry to travelers arriving from Samoa, some of whom are using other ways to obtain health documents, said Papali’i, adding that DoH has administered a total of 854 MMR shots at the airport since the emergency declaration.

For the seaport, the MV Lady Naomi cancelled its Nov. 14th trip after American Samoa issued its emergency declaration. Last Thursday, the vessel arrived with 169 passengers and 150 of them were cleared while 19 were put in quarantine for 14-days after the MMR shot was administered. Of the arrivals, 9 were denied entry.

For the outgoing leg, there were 159 passengers and DoH administered 10 MMR shots, said Papali’i, who noted that American Samoa provided “logistics support” for Samoa, coordinating the pick up of 495 oxygen tanks and two nitrogen tanks from a local supplier.

The largest shipment of 206 oxygen tanks was taken by the Lady Naomi last Thursday, while the rest were picked up during three separate trips to Pago Pago by the Samoa patrol boat Nafanua, according to DoH data presented at the cabinet meeting. (Samoa News will report later this week on other DoH data presentations.)