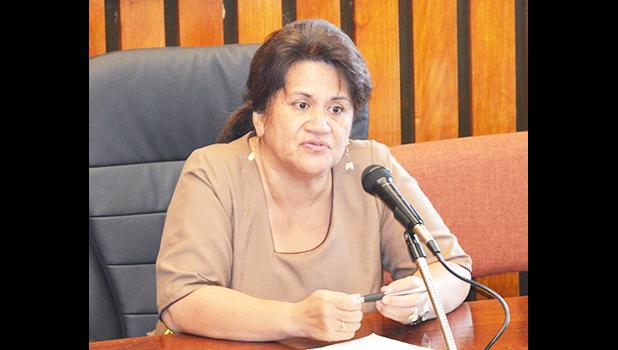 Pago Pago, AMERICAN SAMOA — The Director of the Department of Education (DOE) Dr. Ruth Matagi told members of the House Education committee this week that despite the fact American Samoa doesn’t have a coronavirus case so far, the safety of school children is their first priority as the date to reopen all schools is around the corner.

During a long and clear presentation before faipule, Dr. Matagi stated that DOE has a plan for all schools to follow when school starts next month — and the plan includes both government and private schools, according to the DOE Director.

For elementary and high schools with fewer than 200 students there will be no problem because they have enough classroom space for social distancing.

And all schools will apply social distancing as well as all students and staff will be required to wear masks during school hours. There will be 20 students per classroom, with spacing of student desks and all students facing in the same direction. Schools will also enforce good hygiene like hand washing and sanitizing. They will also encourage staff and students who are sick, to stay home.

High school students, levels 9 and 10 will come to school on Monday, Wednesday and Friday to take up their core courses that include English, Math, Science and Social Science. At that time, students from levels 11 and 12 will be doing their classwork online.

On Tuesday and Thursday, levels 11 and 12 students will come to school to take up their core courses while level 9 and 10 students will be doing their classes online.

Dr. Matagi said their assessment shows that students in levels 9 and 10 really need more face to face time with their teachers thus they will have one more day a week inside the classroom.

DOE will provide school materials including laptops and iPads for students for their online assignments. Parents are also advised to assist their children throughout this time to make sure they are doing their assignments at home.

The Director told the House committee that DOE was awarded a $38 million Education Stabilization grant, and this will help to fund the activities for all public and all privates schools in the territory. Each private school will receive funding based on the number of students attending each school.

The funds will not go out to the schools unless they file reports to prove that they are in compliance on how to spend the funding.

Dr. Matagi said that DOE applied for the grant because they wanted to make sure all students in the territory would be served.

Rep. Gafatasi Afalava asked the director whether the American Samoa Telecommunication Authority (ASTCA) would provide free internet service for all students so that they have the ability to work online.

Dr. Matagi said that they are requesting that ASTCA set up additional internet services such as hotspots in certain areas and at certain times so that students from each village can use the sites for their school work.

Manu’a #2 Representative Tiaoalii Fauagiga Sai raised his concerns regarding the conditions of schools in the Manu’a islands. According to Tiaoalii, often one teacher is teaching four different levels at the same time. He said that what is good for schools in Tutuila must also good for schools in Manu’a.

In response, Dr. Matagi said that it’s very difficult to try and get a teacher for every class when some have only one student per class.

Despite the DOE director’s response, Rep. Tiaalii continued to insist that DOE must treat all students in both Tutuila and Manu’a the same.

Tuala-uta Representative Larry Sanitoa thanked DOE for their hard work especially during the graduation last month despite the fact that schools were closed for over three months.

Sanitoa said that during the school lockdown, he visited every school in the Tuala-uta area and had the opportunity to speak to each principal on how they are doing with student’s schoolwork and other activities.

Sanitoa wanted to know whether DOE has any data to determine whether students from each level have met the necessary benchmarks to move to the next class. He told the DOE Director that he thinks that’s the main concern right now with most of the principals and teachers.

He said that data from schools in the mainland clearly show that 60% of students really need more in-school work to carry on with their education. Sanitoa said that he was extremely nervous because he knows that this number is extremely high also here in American Samoa.

He wanted to know how DOE is going to monitor these student who really need help with their schoolwork so that they can move to the next class level.

He also wanted to know how DOE is going to help those families who don't have internet and families who can’t afford to pay for internet for their child’s homework.

Dr. Matagi told Sanitoa that during the lockdown, teachers continued with their tutoring with many students especially those students who really needed help with their school work and assignments.

“Even during this summer, that’s all they’ve being doing from the ECE all the way to the high schools, teachers are doing tutoring classes in order for them to help with those students who really need help. I also encourage every principal and teacher during our weekly meeting to try to identify those students who really need more help and need to spend extra time with their school activities,” said Dr. Matagi.

Dr. Matagi said that she was more confident that teachers and principals did a great job for students. “We tried to use as much of what is available to us to make sure students were able to do their work while staying at home. It’s quite difficult but we did our best for our children,” said Dr. Matagi.

Sanitoa reminded the DOE Director that most families from his district really need internet service for their children’s online homework, however, the problem is, most of these families are low-income families.

Dr. Matagi said that DOE would look at the request because their priority is to educate our children.