DOE director comes under fire from lawmakers during budget hearing 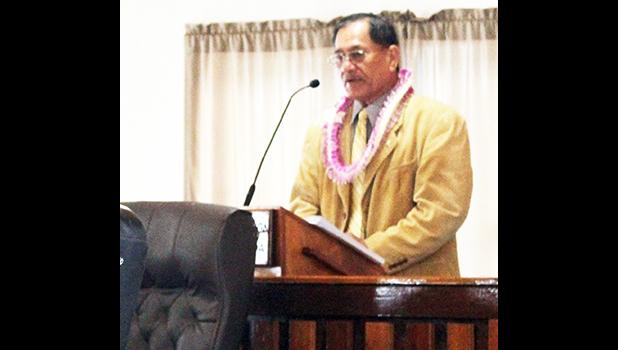 Pago Pago, AMERICAN SAMOA — Without a COVID-19 case in American Samoa two lawmakers suggested that the local Education Department (ASDOE) return to full classroom instruction Monday through Friday, as some schools are faced with a shortage of desks and chairs, and other supplies.

The recommendation, which was first voiced by Rep. Faimealelei Anthony Allen, and supported by Rep. Vesiai Poyer Samuelu, was directed to Education director Dr. Ruth Matagi-Tofiga, who came under fire from lawmakers who were given a chance to ask questions during Tuesday’s ASDOE fiscal year 2021 budget hearing before the Fono Joint Budget Committee.

Since the start of the new school year 2020- 2021 on Aug. 31st, there have been complaints and concerns raised by parents to their lawmakers and the news media regarding the shortage of desks and chairs, the lack of computers for use by students and teachers — especially schools with enrollment of 500 and more, requiring both classroom and virtual instruction.

While computers and iPads have been ordered, teachers and others have complained to lawmakers that the E-rate internet service in their schools doesn’t reach every classroom and at times doesn’t work.

At the outset of the ASDOE budget hearing, Matagi-Tofiga explained the department’s budget for FY 2021 is about 15% higher than the current fiscal year. And the hike is attributed to among other things, the E-rate program — as classroom teaching and learning has changed with combined use of internet by both teachers and students.

The hike is also attributed to adding to the budget the sports programs, which were not included in FY 2020 budget, as well as the new salary-threshold set by the governor for Associate degree holders and high school graduates with diplomas.

Joint Budget Committee co-chair, Sen. Magalei Logovi’i said that when questioned last week on the status of the ASDOE order for desks and chairs, the acting chief procurement officer, responded that because the ASDOE order was more than $1 million, it required going through the bidding process. Magalei sought an update from the Education director during the hearing.

Dr. Matagi-Tofiga told the committee that as of now, no student is sitting on the floor. She identified Tafuna Elementary School where such an incident occurred during the first day of school and it was reported to the main ASDOE office and by the following day, 200 chairs and tables were rented and sent to this school.

She explained that her department’s order was submitted to Procurement Office for urgently needed supplies including desk and chairs sometime in early June after ASDOE received funds under the CARES Act in May this year from the US Education Department.

According to the director, she had also requested that the order be “sole sourced”, as there was only one vendor that carries the specific types of chairs and desks needed — as part of classroom social-distancing protocol. And she even sought assistance from the governor and personally followed-up with the Procurement Office.

She pointed out that temporary chairs and desks have already been supplied to Tafuna High School and Tafuna Elementary for now until the order arrives, which is expected this week.

For computers and iPads for students, she said this order — which is more than $3 million — was also delayed in arrival. She said the Procurement Office wants this order, as well, to go through the bidding process but the difficulty of the process is that the computers and iPads are not available locally and therefore ordered off island.

Matagi-Tofiga said ASDOE has also requested the possibility of relaxing the procurement process because these supplies are not readily available on island.

She insisted that there are no students sitting on the floor at this point in time. “We’ve solved that problem until we get permanent desks,” she said, noting that the CARES Act funding is also helping with further improvement to the E-Rate program.

Magalei, an ASG Treasurer and Budget Office director in previous administrations, pointed out that under “emergency” situations, the director can request the Procurement Office to waive the bidding process and for the order to be “sole sourced”.

The Tualauta senator then informed the director of a “sad and disappointing” scene he witnessed during his site visit to Pavaiai Elementary School with students sitting on the floor due to the lack of chairs. He also witnessed a student sitting on a desk covered with a sheet, because the table was partly broken.

Magalei’s voice quivered and become emotional repeating to Matagi-Tofiga what he observed at Pavaiai Elementary School, saying that he is very saddened with such a situation as “these are our children” and “what are we doing” to help them?

The senator said he now questions who is telling the Fono the truth about which agency is causing the delay in the orders needed for public schools — the Procurement Office or ASDOE. He reiterated that the director can seek a “sole source” process, especially if the vendor has a good reputation in providing the ordered supplies without delay.

Matagi-Tofiga said she visited Pavaiai elementary but didn’t witness what Magalei had just described. She said there have been meetings with principals, with the latest one held last Friday, and this issue was never brought to ASDOE’s attention.

Rep. Faimealelei shared with Matagi-Tofiga and the committee what he witnessed during a recent visit to Aua Elementary, where the E-Rate was not working and the teacher had to leave students in the classroom and go to the principal’s office to use the internet.

According to the Aua faipule, staff from Matagi-Tofiga’s office have urged the Fono to bring up these issues because they are afraid to approach the director. Additionally, staff claims that the current policy of staggering classroom instruction is not working.

Faimealelei questioned how students will learn anything if E-rate is not working and this is the same for teachers, who will not be able to conduct virtual teaching of their lessons. He also raised with the director that Aua elementary has no vice principal, counselor or a school secretary.

He suggested that public schools return to full-five day classroom instruction instead of the current policy, especially since American Samoa has no COVID-19 case. The suggestion was echoed by Rep. Vesiai, who conducted a site visit of Peter Coleman Elementary in Pago Pago.

Matagi-Tofiga responded that none of these issues have been raised with her office, including during last Friday’s meeting of principals.

Three lawmakers who attended the hearing, but weren’t able to ask questions, later told Samoa News that public schools should have never opened until everything was in place, especially the needed supplies.

Two ASDOE teachers told Samoa News yesterday that they would prefer to have classes return to the usual practice of full-day instruction, five-days a week.

“There’s no sense of having this split-policy of both face-to-face and virtual learning when the department is not even prepared,” said one of the teachers, who noted that her concerns along with others have been shared with their lawmakers.

During the budget hearing, Magalei also inquired about the status of the pay for teachers who were involved in summer workshops. Matagi-Tofiga said some of the checks were released last Thursday and the rest will be released soon.