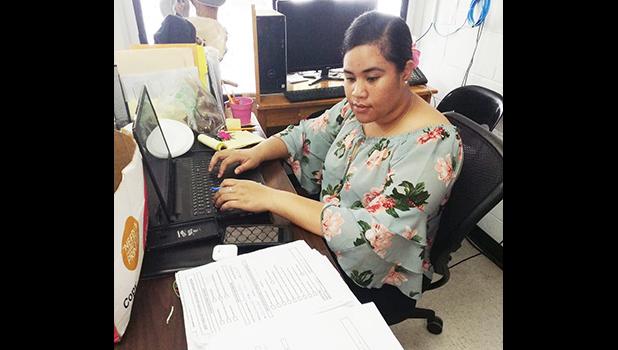 CARES Act checks for approved fishers will be mailed to them
By
Ausage Fausia
ausage@samoanews.com

Pago Pago, AMERICAN SAMOA — The Department of Marine and Wildlife Resources (DMWR) that has been inundated with CARES Act applications wants to set the record straight — no checks have been issued since the applications closed two weeks ago, Dec.11, 2020.

“We want to send out this message to members of the public especially to all fishermen who applied for the program that there have been no checks issued so far. We’re still in the process of putting together all the applications and data before we send the applications over to the U.S. for approval,” said DMWR representative, Maria Vaofanua during an interview with Samoa News this week.

Vaofanua said that they’re now entering all the information from each application before they are sent to the feds for final approval.

Vaofanua said that the aim is to complete their evaluation and screening before the end of the year with the hope that they will get final approval by the end of January or the beginning of February on who will be eligible for the program.

According to Vaofanua, the DMWR with assistance from NOAA and the Pacific States Marine Commission received $2.5 million from the 2020 CARES Act to assist Samoan fisheries affected by the coronavirus pandemic.

Last week, the team went to Manu’a to collect applications from local fishermen there.

“We explained to the people of Manu’a that not only do we have a program for fishermen who have a license to fish for money, but we also have categories for Subsistence Fisheries or Cultural Fishers (Individuals) and these are fishermen who fish to feed and support their family. These are the people who go out fishing and bring fish home to feed their family, but do not sell it for money,” Vaofanua explained.

Vaofanua said that in Manu’a and also other parts of Samoa, many families depend on the sea for food and a living. Some families have a fishing vessel where they go out fishing with the purpose of selling fish to earn money. And, there are also families who solely depend on seafood for their daily meals.

As the screening process got under way, there were applications that have been denied because the applicants were not fishermen.

The DMWR also advised some local fishermen to obtain a business license before they continue to go out fishing and selling their fish.

“So, we advised some of the local fishermen to comply with the law by applying for a business license, because if they don’t comply, they will be sanctioned according to the law,” Vaofanua said.

For those whose applications were denied, there is a “seven business day appeal process” where you can file an appeal if you don’t agree with the decision DMWR made… maybe we missed some information, the appeal process will give us the chance to review our decision,” he said.

After DMWR completes the screening and evaluation of all the applications, the next step is to scan all the approved applications and send them off island and from there, the checks will be cut and sent directly to each fisherman’s mail box.

“Once we are done with the screening and evaluation process and send the application off-island before the end of the year, then our part for this program is over.

“The last part of the program, which is who is going to get a check is up to the office off-island to decide and friendly advice to all the applicants is to please, don’t call our office asking for your check but please, check your mail box,” Vaofanua concluded.