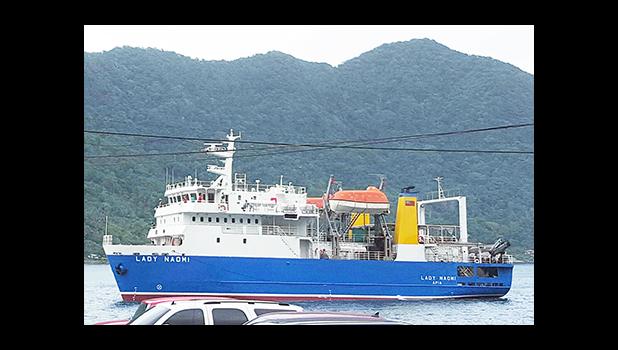 Pago Pago, AMERICAN SAMOA — While Samoa's government is warning anyone trying to discourage people from getting measles vaccinations to stop it, American Samoa is fighting rumors about 14- 18 passengers off the Lady Naomi that were allowed to disembark at the Pago wharf without immunization records or proof of measles vaccination. This according to a shipping company’s employee, who did not wish to be identified.

Samoa News spoke to the Territorial Epidemiologist Aifili Tufa, who said there was a delay releasing passengers from Samoa off the Lady Naomi yesterday morning, due to “questionable paperwork” that had to be verified by the local Dept. of Health with the Samoa Health Ministry’s Director General of Health Leausa Toleafoa Dr. Take Naseri.

Tufa said Dr. Leausa confirmed all the paperwork, which led to the release of all the passengers. However, he said that American Samoa has warned that next week all paperwork must meet the agreed upon protocol — signatures, stamp color, etc. — or else the passengers will be returned without disembarking.

American Samoa continues to screen passengers in both the arrival and departure areas of ports of entry, as the territory tries its best to protect the territory from the spread of measles.

In Samoa, Radio New Zealand is reporting the death toll from Samoa's measles epidemic has risen to 20, with 202 cases recorded in the past day.

The government said 147 people were currently in hospital because of the measles, including 11 children who were in a critical condition.

The majority of them are at the main hospital in the capital, Apia.

It said there had been 1644 cases of measles recorded in the country since the outbreak started last month.

The country is in a state of emergency, with schools closed, a mass vaccination campaign underway, and public gatherings restricted.

Nearly 89 percent of the cases are on the main island, Upolu, and restrictions are in place on travel between the two islands, including a ban on children under the age of 19.

All but one of the recorded deaths have been children; nine under the age of one, and 10 between the ages of one and four.

WORK AND TRAVEL BANS IN SAMOA

Meanwhile, pregnant women in Samoa who are unvaccinated against measles have been told to stop going to work.

Travel between the country's two main islands is also banned for those under the age of 19, as part of the latest round of government orders as it tries to contain the measles epidemic.

They are also banned from public gatherings until a state of emergency is lifted.

The orders have come into force with immediate effect.

A compulsory vaccination campaign is also underway to stop the spread of the measles, which has so far claimed the lives of at least 16 people, most of them children.

The government has also warned anti-vaxxers, saying any efforts to hinder the campaign are illegal.

"Any person that actively discourages or prevents in any way members of the community from receiving their vaccination injection, is hereby warned, to cease immediately, and is similarly warned not to take any further action of that kind," it said.

Before the epidemic, measles immunity in Samoa was as low as 31 percent.

A list of times and places where measles vaccines are available is on the Ministry of Health's website.

Vaccination teams would also be going out into communities.