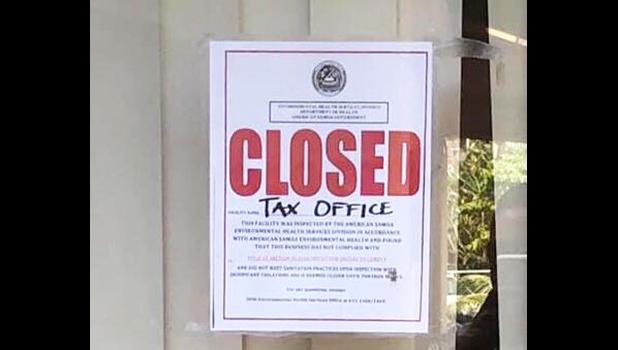 Pago Pago, AMERICAN SAMOA — Disgusted — and frustrated — employees of the Tax Office were dismissed early from work this past Wednesday and yesterday, due to the unbearable stench left behind by dead rats in their office, located on the first floor of the A.P. Lutali Executive Office Building (EOB) in Utulei.

Samoa News understands that Tax Office employees requested assistance from the Department of Administrative Services (DAS) — charged with maintaining the EOB — on Tuesday, but there was no response.

By Wednesday, representatives from Administrative Services showed up but this was after Tax Office employees had already contacted the Department of Public Health.

It was around 9a.m, Wednesday morning that Tax Office employees were told by DOH inspectors to "go home.”

Yesterday — without any prior notification of whether or not they were to report to work — Tax Office employees showed up for work. Again, around 9a.m, they were told to go home.

A Tax Office employee who spoke to Samoa News yesterday said the smell in their office is "really bad". Apparently, Administrative services didn't find the dead rat Wednesday. But they did so yesterday.

Today, Tax Office employees are expected to show up for work, again. The ones who spoke to Samoa News are hopeful that the smell has dissipated.

Samoa News has received horrific reports about the rat infestation in this area of the EOB. There have been stories in the past about people, not just Tax Office employees — who work on the first floor of the EOB — being released from work due to the smell of dead rats.

"Everyday, we can hear the rats fighting in the ceiling," said one Tax Office employee.

"Everyone in this building, specifically those working in offices on the first and second floors, are affected by the rat problem."

Samoa News — during a recent visit to the Tax Office — noticed mold in the ceiling. While some may not think this is a big deal, ingesting mold over a long period of time can lead to respiratory problems — even death.

And if that isn't enough, one of the toilets in the first floor bathroom next to the Tax Office — which is utilized by the public — reportedly overflowed one time and the water seeped into the Tax Office.

Again, DOH was contacted, and — again — employees were told to go home.

"What is it going to take to get something done?" said a frustrated Tax Office worker. "We work in an environment where our health is in jeopardy. These are longstanding problems that have been reported for years and still, nothing has been done. We still have the rat problem, the mold continues to spread, and the smell is overwhelming."

An Immigration employee, who works directly across from the Tax Office said, "The Governor and Lt. Governor work out of this building. They may not know how bad it really is, because the problems don't exist on the third floor, where their office is located. Perhaps one of them — or both — can take time out of their busy schedule to see first hand the deplorable conditions that ASG employees are having to put up with."