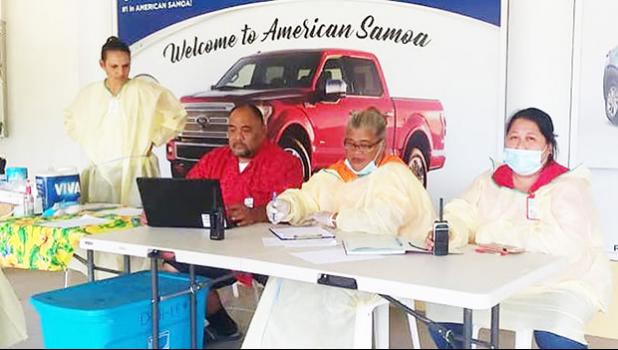 Pago Pago, AMERICAN SAMOA — Gov. Lolo Matalasi Moliga has told cabinet members not to give up easily on enforcing current policies and regulations implemented for entry permits - due to the measles outbreak - for travelers from Samoa.

Speaking at Sunday’s cabinet briefing on the measles update, Lolo said that what people want are all important, but what’s more important and priority for the American Samoa Government is the “safety and health of our people”.

Port Administration director Taimalelagi Dr. Claire Tuia Poumele wanted to know how the 19 passengers were allowed to board in Apia by Samoa Airways and Talofa Airways - which also checked these passengers’ travel records and immunization documents. She said there has been a lot of criticism against ASG on the treatment of these travelers from Samoa, those who were returned to Apia.

Samoa News also has received several complaints regarding the entry permit process, and social media has been bombarded with criticism against ASG for the current entry permit requirements.

Among the requirements are MMR shot records signed by specific Samoa health officials; 14-day review period for permits; and clearances from 5 local departments and agencies. (See Samoa News Dec. 23, 2019 edition). At the cabinet briefing, DoH director Motusa Tuileama Nua said all entry requirements and “restrictions” remain unchanged, and covers not only Samoa but other Pacific countries as well.

He said the problem is, the two airlines serving the inter-Samoa route are making their own decisions, on whether or not to comply with entry permit requirements imposed by ASG. He alleges that there are times the airlines push forward to get business by putting passengers on flights without proper documents, thereby “trying to stretch the ASG’s policy” in order to get the business.

He claims the airlines are pushing these passengers to travel, although they don’t have the required documents for entry. Motusa said there have been incidents where a person is denied entry and returned to Samoa but a day or so later, the same person is back on the flight trying to enter the territory - still without proper documents.

Another DoH official who was at the briefing said that not only do these travelers not have the required MMR shots or records, some of them alter the dates on their immunization records to show that they have already fulfilled the 14-day required quarantine period before traveling.

(In previous cabinet briefings, DoH indicated that their staff at the airport have come across immunization records that appeared to have been forged or altered in order to gain entry into Am Samoa. Additionally, the Samoa heath official signature on the immunization form is not the required signature.)

Lolo acknowledged that this is one of the issues that has sparked a lot of criticism and added, “that will not change policies already implemented”.

He revealed that people have contacted him about waiving the current requirements, such as the 14-day wait period after getting immunized before traveling to the territory. He said people are trying to circumvent the process, which includes a 14-day quarantine period and a 14-day review period for entry permits for those from Samoa.

“We can’t change policies already implemented because these decisions were made to protect the health and welfare of all people in American Samoa,” Lolo said. “We all love and care a lot” when it comes to relatives in Samoa but it’s important to protect local residents from the further spread of measles.

Lolo said local companies bringing in workers from Samoa have been told that they must comply with current policies on entry permits. He said there are fishermen from other countries who are complying with the same policies.

Early this week, Apia-based Samoa Observer reported that more than 10 travelers including church ministers were denied entry at Pago Pago Airport in the past week, despite saying they had the required entry permits and immunization records.

One of them was Rev. Lole Luamanuvae who told Samoa Observer that he had a certified immunization clearance from the Ministry of Health but was asked to return to Samoa. According to Luamanuvae, he provided his 30-day entry permit and immunization clearance at Faleolo Airport and traveled to Tutuila only to be told by a woman at the Pago Pago Airport that the “signature on my clearance did not match the Health Official’s signature that’s required for entrance."