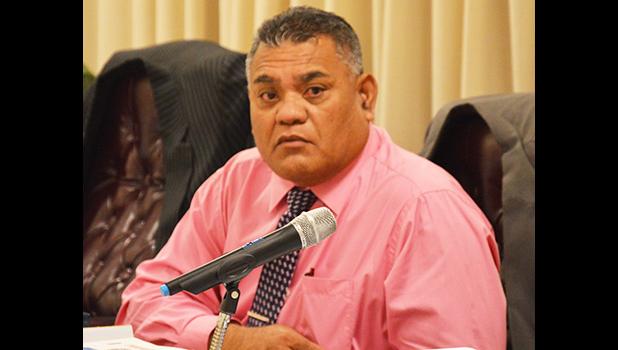 Pago Pago, AMERICAN SAMOA — The Chairman of the House Public Health and Hospital Committee, Rep. Vesi Talalelei Fautanu Jr was very disappointed after a request for a second Medicaid charter flight to evacuate patients for off-island treatment and repatriate residents stranded off island was denied by the American Samoa COVID-19 Task Force.

Vesi told Samoa News that this denial shows the true colors of the Administration and that they don’t care about the people.

Vesi stated in his letter, “For more than five months, we have shut down all non-essential travel to and from American Samoa since the coronavirus pandemic began. Regardless of the lawsuits against ASG, your steadfastness and caution has prevailed. We do not want coronavirus to have a foothold in the territory.”

While the recent Medicaid charter was a complete success and able to ferry people stranded on island, college students and military recruits, the Manu’a faipule told Lolo that the committee strongly believes that a second medical charter flight to Hawaii is necessary, while also serving as a repatriation flight for those residents anxiously waiting to return home.

“Due to the rising of infection amongst minorities such as Pacific Islanders, we feel it is vital and urgent that we have a plan to repatriate our residents for their safety and well being,” Vesi said.

He further stated that that the longer we leave our local residents stranded in Hawaii and the US mainland, the more likely they are to contract this virus.

“We have successfully repatriated from Samoa, similar quarantine procedures can be implemented to ensure the safety of the territory. But we have to act fast, and we have to act now,” Vesi said, adding that both LBJTMC and the local Medicaid office can attest that we have more than enough patients requesting the Off-Island Referral Program.

Chairman of the ASG COVID-19 Task Force, Iulogologo Joseph Pereira stated in his response that “there is no thought of conducting another Medicaid charter flight to address the above stated purposes.”

“As you are well aware the situation in Hawaii and the States is highly volatile with the exponential spike in the number of confirmed COVID-19 cases thus the governor is hesitant to expose our people here to harm’s way by repatriating our people stranded in the US,” Iulogologo told Vesi.

Moreover, Iulogologo said that American Samoa does not have sufficient quarantine facilities to isolate people returning home.  He stated that the government has collectively worked very hand and sacrificed much” to keep our islands Coronavirus free.

Speaking to Samoa News last week, Vesi voiced his disappointed and frustration with the decision to deny the request.

“We’re not doing this for the sake of the election or for any family member of a friend, we’re doing it for all of our people who really want to come back home,” Vesi told Samoa News.

“There are over 100 people pleading to return to the territory because this is their home. Unfortunately, our government said no, you do not belong here.”

The Manu’a faipule pointed out that many of the stranded residents went off island for medical appointments. They are running low on money having to pay for their stay off island and at the same time continue to pay bills and loans in the territory. He said that about 100 people are just waiting to come home, while residents who were referred for medical treatment have completed their appointments and are waiting for a flight to come home.

Before the Fono took a mid-session recess break two weeks ago, Vesi assured members of the House that he would send a request to the governor and members of the COVID-19 Task Force to consider a second Medicaid flight.

Another Manu’a faipule echoed Vesi’s statement saying that the American Samoa Government should consider people of Tutuila and Manu’a who are stuck off island as the first priority — not people from other countries, including Samoa.

Rep. Tiaoalii Fau Sai said he wants to bring those people who are stranded in Hawaii and the mainland home immediately.

Vice Speaker of the House Fetu Fetui Jr cautioned that while they all feel for our people who cannot come home, they must take the advice of the medical experts seriously to ensure that the lives of people in the territory are not harmed.

This was the same issue raised in the Senate on the last day of their session. Sen. Logoai Siaki told the Senate President that they need to advise the Governor to find ways to bring our people who are stranded in Hawaii and the mainland home.

A group, “Tagata tu Faatasi Alliance of American Samoa” has come together off-island comprising 280+ stranded residents of American Samoa. They have written letters to faipule as well as publicly pleaded to return home based on ‘data & the science’ in the Samoa News. While some of the group remains optimistic and fierce in their pursuit of returning home, others are feeling “Abandoned & Neglected” — according to their Facebook page, United Front.