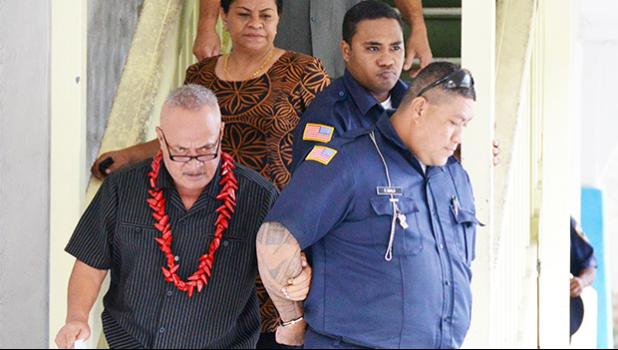 The preliminary examination hearing for DPS officer Fa'auma Malo, who was arrested last week, is scheduled for this morning in the District Court. Malo, who made his initial appearance Monday before Judge Fiti Sunia, is being held at TCF until he pays a $5,000 surety bond.

Malo is charged with one count of public servant acceding to corruption, a class D felony punishable by imprisonment of up to five years, a fine of up to $5,000 — or both.

According to court documents, a lawyer from the Attorney General’s office contacted one of the captains at the DPS office, notifying him that a young man who was later identified as the victim in this case, wanted to file a criminal complaint against a police officer for coercing and soliciting money from him.

Court documents state that on September 18, 2017 at 10:00 a.m. the victim went to the Tafuna sub-station to file his criminal complaint.

The victim told police that it was between April and May this year while he was employed at Public Works that he drove a government vehicle transporting equipment to drop off at the Fagatogo wharf.

When he arrived, he saw vehicles parked on both sides of the road behind the museum. Since the truck he was driving didn't fit through the gap between the vehicles, he decided to park in front of the Marine Patrol office.

A Marine Patrol police unit then came from behind and directed him to move forward so they could park where he was parked.

While he was moving his vehicle, the victim said he struck an unoccupied vehicle and cracked its taillight.

The victim told police Malo approached him and told him to back up his vehicle and park between the museum and the fire station, so no one would know that he (the victim) had just struck the unoccupied vehicle.

The victim observed that the defendant’s polo shirt identified him as: “F. Malo”.

According to the victim, Malo walked up to him and asked him if he wanted a ticket or to be forgiven. Malo allegedly told the victim that the ticket would cost him $400 but he would be forgiven for $100.

The victim told Malo he would pay the $100 when he gets his paycheck.

A few months later, Malo approached the victim at the Fagatogo Market area and informed him that he owed him $1,000 because he failed to pay the $100 that he agreed to during their initial agreement.

About a month ago, Malo showed up at the victim’s new workplace in Fagaalu (the victim resigned from DPW since the incident) and told him that because he failed to pay him $1,000, he now owes him $2,000 — and he has days to pay the full amount, or he will be thrown in jail.

Court affidavits state that Malo continued to call the victim at work, asking him to pay the full amount.

On Friday, Sept. 20th, the victim’s co-worker told him that a police officer was waiting for him outside of the office.

The witness also told police that one day, Malo came to their workplace in a police unit, wearing his police uniform. He asked where the victim was, and the witness told him he wasn't there.

Around noontime Sept. 16th, according to the witness, Malo called the office again, asking for the victim. He did the same thing on Monday, Sept. 18th.

The witness told police that Malo continued to stop by their workplace in full uniform, in a police unit, asking for the victim.

On Sept.19th, officers interviewed Malo at the Tafuna sub-station, to get his side of the story.

At the time police informed Malo that he was not under arrest nor in police custody, and he was free to leave at any time if he wanted to. The defendant chose to give his account of what had happened.

In his non-verbatim verbal statement to police, Malo admitted and confessed that although he doesn't recall the exact date, he remembers the incident referred to by the victim, involving an accident in the vicinity of the marine patrol office.

Malo said he told the victim that there were no witness who saw the accident, and in order for him to be forgiven, he had to give him $100 because he didn't issue him a traffic citation.

He said later he met the victim at the market area where he approached him and asked about the $100 to which the victim assured him that he would pay him the money.

Malo told the victim that because he already repaired the damages to his cousin’s vehicle, he must pay him $1,000. Malo said he also approached the victim at his workplace to tell him he owed him $2,000.

Malo said he never received any money from the victim, but admitted that he was struggling financially to support his family so he abused his position as a police officer and used the opportunity to solicit money from the victim. He said he was very desperate to get the $2,000.

Court documents note that Malo was crying and apologized for his wrongdoing, and he was shaking and moving around during the interview process.