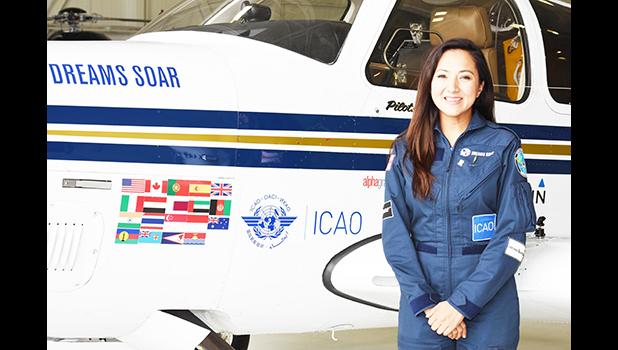 A female aviator on a global-solo flight in support of the non-profit Dreams Soar — which promotes women in STEM — Science, Technology, Engineering and Mathematics — spent two days in Pago Pago over the weekend.

Shaesta Waiz, who recently turned 30, landed around 1p.m last Friday at Pago Pago International Airport, piloting her Beechcraft Bonanza A36 plane. Her last stop was Fiji and she departed the territory early this morning (Aug. 28) heading to Hawai’i with a stop in Kiribati. She was initially scheduled to depart yesterday, but was delayed due to very bad weather in the territory.

Born in a refugee camp, Waiz and her family traveled from Afghanistan to the U.S in 1987 to escape the Soviet-Afghan war, according to her bio provided last Friday to Samoa News by Dreams Soar, a non-profit group she founded in 2014 to inspire the next generation of STEM.

“There is a shortage of women in these industries globally, and Dreams Soar is actively promoting STEM to make a difference through a global flight around the world,” Waiz said, according to Q&A media information sheet provided by Dreams Soar. “Scarcity of STEM talent and skilled, diverse future workforces affect various STEM/aviation industries even today.”

“Over the next 10 to 20 years, we are experiencing fewer women and children engaging in such fields because of varying limitations globally,” she noted. “Majority of the barriers shared across our audiences are available funding and resources, cultural traditions, environmental impact, socioeconomic backgrounds, and as several groups of young women have expressed to us, ‘our voice is not heard'.”

Throughout the global flight, Dreams Soar is fundraising to establish a scholarship program, awarding funds to young children worldwide inspired by this powerful initiative.

“We aim to be one of the first small U.S. based nonprofits to award funds specific to STEM and aviation related education and career fields, on a global scale,” said Waiz who earned both her bachelor and master degrees from Embry-Riddle Aeronautical University.

Her solo-flight made 30 stops over five continents in 18 countries in approximately 90 days—with more than 25,000 miles flown, according to Dreams Soar. The longest leg of the flight is from Hilo, Hawaii to El Cajon, California, with 2,184 nautical miles over the Pacific Ocean. More information on Dreams Soars and Waiz’s global flight can be accessed at <www.dreamssoar.org>

This is a special bulletin from the American Samoa Department of Homeland Security – TEMCO issued at 05:15 p.m. Sunday, August 27, 2017.

The National Weather Service has issued a HIGH SURF WARNING for Tutuila, Aunu’u, Manu’a, and Swains Islands. This warning is for all East and South facing reefs. Dangerous surf of approximately 14 to 16 feet will affect these areas. This warning is in effect until 3:00 p.m. Tuesday, August 29, 2017.

The National Weather Service has also issued a WIND ADVISORY for Tutuila, Aunu’u, Manu’a, and Swains Island. This advisory is in effect until 3:00 p.m. Tuesday August 29, 2017. Southeast winds of approximately 20 to 35 mph with gusts up to 45 mph are expected.

Residents are also reminded that winds of approximately 35 mph with gusts of 45 mph can make traveling difficult, large tree limbs could fall and cause damages, as well as lightweight objects will most likely be blown around. Again please take precautionary measures in order to protect life and property.

The National Weather Service has also advised of a SMALL CRAFT ADVISORY for Tutuila, Aunu’u, Manu’a, and Swains islands.

The American Samoa Department of Homeland Security – TEMCO will continue to monitor the situation and we will issue further bulletins if necessary. Report any weather related incident to EOC at 699-3800 or Police at 633-1111.

Under the federal Zika Response and Preparedness Act, American Samoa is being awarded more than $400,000 under supplemental grants for fiscal year 2017, according to the US Health Resources and Services Administration (HRSA), in its Notice of Supplemental Award released last week.

The supplemental awards to American Samoa, Puerto Rico, and U.S. Virgin Islands is for the Zika Maternal and Child Health Services Program.

Data on the HRSA supplemental awards notice, states that American Samoa will receive $423,142; Puerto Rico with $52,850 and US Virgin Islands with $574,008. The funding, for the period of September 2017 through December 2019, is administered by the Departments of Health of the three territories.

Justification of the supplemental grant, according to HRSA, is that the current spread of ZIKA poses a significant threat to public health, including the health of women, children, and families who are affected by ZIKA.

Following last December’s grant awards to the health departments of the three territories, recipients continued to identify pregnant women and infants with lab evidence of ZIKA infection that led them to refine their response to ZIKA, said HRSA, an agency within the US Department of Health and Human Services.

HRSA’s Maternal and Child Health Bureau (MCHB) received information from the territorial health departments of unmet needs in their response to ZIKA through monitoring site visits, regular communication, and prior approval requests.

Needs identified by recipients included additional equipment, personnel, and transportation services. With further analysis of other federal funding and the current epidemiological data, MCHB confirmed additional funding is essential to ensure access to services and a comprehensive medical home for women, children, and families who are or may be affected by ZIKA infection.

Additionally, disease burden and the significant increase in pregnant women and children with lab evidence of ZIKA infection in American Samoa and the U.S. Virgin Islands was also considered as a factor in determining the allocation of funds to the territories to address unmet needs.