Commercial flights between Manu’a and Tutuila resumed this week 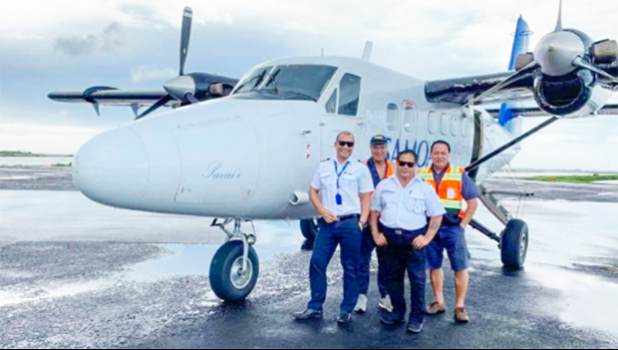 Travelers are asked to contact the airline’s airport office for updates
By
Fili Sagapolutele
fili@samoanews.com

Pago Pago, AMERICAN SAMOA — Samoa Airways has set a schedule this week to resume commercial flights between Tutuila and the Manu’a island group, while the Samoa government owned airline “monitors” passenger demand in order to schedule for future flights

Two flights were scheduled for Fitiuta Airport on Ta’u island for yesterday, Tuesday, and also for Thursday, tomorrow; as well as two fights for Ofu Airport on Ofu Island, for today, Wednesday, and Saturday, according to the schedule posted on the airline’s website.

“This is the flight schedule for this week and we will continue the monitor the demand before coming up with a flight schedule for next week as well as the rest of the month,” airline local station manager Toe Loia told Samoa News yesterday in a brief phone interview. “And the schedule is also subject to change, based on demand.

For example, he said yesterday’s flight to Fitiuta was already full while today’s flight for Ofu, had only four booked passengers for the outbound flight.

Travelers are asked to contact the airline’s airport office at 699-9126 for updates and more information.

As for flights on Mondays and Fridays to Manu’a, those days are reserved for ASG charters, said Loia, reiterating the airline will continue to monitor flight demand at this point, as commercial service resumes.

Informed about the resumption of commercial flights, three residents of Ta’u told Samoa News on Monday night they are happy and “thrilled” so they can travel between the islands again. Two of the residents were on yesterday’s flight to Fitiuta.

Commercial flights were suspended about two months ago, per directive by Gov. Lolo Matalasi Moliga, preventing people from traveling by air between the islands, as American Samoa is under the COVID-19 emergency declaration.

(Samoa News points out that according to social media postings, alia traffic between the islands continued.)

Later, the government operated charters with Samoa Airways for emergency purposes and medivac for critical patients.

But as the governor’s current Sixth Amended Declaration became effective July 1st, more local restrictions have been lifted and this has allowed commercial flights to resume for Manu’a, according to ASG officials.