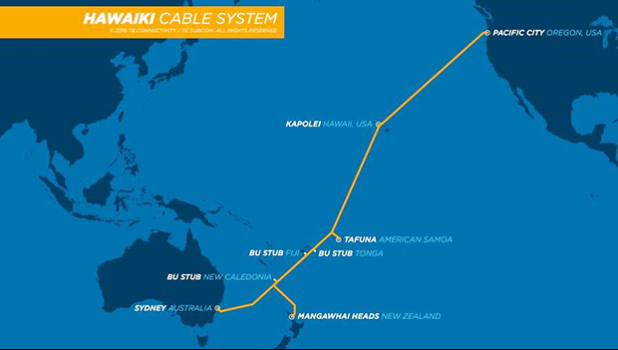 Pago Pago, AMERICAN SAMOA — At the recent American Samoa Chamber of Commerce gubernatorial forum, Technology Industry Development was another segment- issue raised with three of the five gubernatorial teams, who took part in the event.

And the Hawaiki submarine cable, which went live in American Samoa almost two years ago through the American Samoa TeleCommunications Authority, became the subject of one of the questions raised with the gubernatorial teams pertaining to technology.

“The world is constantly improving through major technological advances. American Samoa has acquired the Hawaiki Cable but is unable to fully utilize its potential due to lack of technological development,” according to the Chamber.

The question was first directed to the I’aulualo and Tapaau team, and I’aulualo responded, that “technology development, to us, is the key industry to seriously look at. We have all the infrastructure connected here. But we need to build an economy based on technology.”

“We need to bring a billion dollar industry to connect to the Hawaiki cable. We need to build a data center. That’s what we need to do,” he said and noted that Hawaiki cable is not utilized to its full potential“ and it’s time for the new leaders to put that into a vision and to materialize that in the next two years.”

And if elected, the I’aulualo and Tapaau promised to “materialize this vision within 24-months,” said I’aulualo, who told the audience that he took part in bringing the Hawaiki cable to the territory. (He is referring to his role as the executive director of the ASG Employees Retirement Fund, which made the initial investment to bring the Hawaiki cable to American Samoa.)

Talauega, responding for the Lemanu and Talauega team, first pointed out that he was “fortunate to be involved in securing funds that enabled us to acquire Hawaiki cable. And as a result of that, companies such as Cloud and other companies are now doing data centers.

“Time will come when we develop and monetize it but that depends on policies that are focused on creating businesses and supporting businesses,” Talauega said. “Lemanu and I think very strongly that we should support business and Hawaiki will be one way to do just that.”

Lemanu said later on another-side question to technology development that prior to Hawaiki cable landing here, there were some companies from Samoa that wanted to set up operations in the territory and had approached the administration at the time.

However, he said there were two main issues that made it unable for them to achieve their goal. First was the high utility rates and second was the high cost and not sufficient bandwidth for internet connection.

“And these two issues are some of the reasons the governor focused on Hawaiki cable” landing here, said Lemanu.

For his response, Tapumanaia said the Nua and Satele team believe that the benefit of technology has increased the efficiency of communication and how things have happened in American Samoa.

“We believe the installation of the Hawaiki cable has put us in a position to maximize the use of technology to benefit us in areas of government service, such as health care, tele-health, [and] education with virtual learning and Zoom teleconferencing,” Tapumanaia said.

“It is important to us to understand that technology has made it possible for businesses and other industries such as call centers, data centers” to set up operations he said, and noted that it’s the team’s plan to work closely with ASTCA “so we may be able to get Hawaiki cable throughout the region so we can become the telecommunication hub of the Pacific.”

I’aulualo said the “I’aulualo and Tapaau cannot reemphasize enough how important it is for American Samoa to capitalize on the connection of the internet we have now for economic development. It’s important. We have the infrastructure to build that.”

With the current threat of the COVID-19 pandemic, “and the way things are right now, it’s probably the only option for us, we can look at for economic development,” he said.

“Bringing a data center to American Samoa — we have the infrastructure to do that.  And that’s a billion dollar industry. It will help small businesses to grow, it will help our economy, it will create jobs — at least over 2,000 jobs. So there is absolutely no reason for us not to do that,” he told the audience.