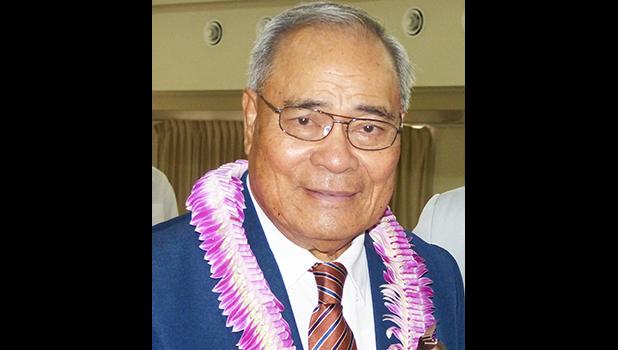 Pago Pago, AMERICAN SAMOA — Gov. Lolo Matalasi Moliga is putting together an agenda of issues to be addressed by lawmakers before sending out a Call of a Special Session of the Fono, as lawmakers prepare to officially close the current legislative session on Oct. 2nd.

The governor made the revelation on Wednesday, during a cabinet meeting at Tafuna High School. Local laws give the sitting governor the authority to call a special session, and the call includes specific issues on the agenda for lawmakers to discuss, as well as the number of session days for the Fono to convene.

Distributed at the cabinet meeting was the governor’s Sept. 19th letter to Fono leaders in which Lolo raised concerns over “verbal abuse and demeaning remarks uttered” by lawmakers to cabinet members and Executive Branch professionals during the recent budget hearings. (See earlier Samoa News post for details.)

Lolo thanked his cabinet for their time, in testifying during the FY 2020 budget hearings, saying this was one of the budget hearing cycles with several problems. He said that what has been observed is the behavior of the Fono, things that should never have been displayed during the budget hearings, during which there was “abuse of power” by lawmakers through their questions to cabinet members.

He said he has written to Fono leaders and added, “I want them to know that we cannot accept that kind of abuse of power” by the Fono. Lolo identified American Samoa Telecommunications Authority chief executive officer, Lewis Wolman as “one of the victims”, as well as others.

“I don’t mind if questions are related to the budget,” Lolo said, and asked his cabinet to be patient while he and the Lt. Gov. Lemanu Peleti Mauga work on addressing this issue with Fono leaders. And “from now on, only directors can go to the Fono to testify during hearings,” he told directors. “You do not send a deputy or somebody else. If the director wants someone else to attend a hearing, let me know.”

He specifically mentioned the Department of Public Works, when he spoke about directors being the only ones that testify during hearings, saying there are many times that faipule want to talk about their roads and they call DPW senior personnel to provide testimony.

The governor concluded by urging his cabinet members to continue to work closely with the Fono and always to show respect during hearings.