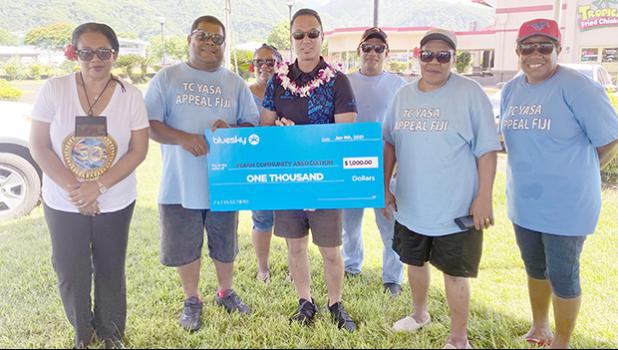 Pago Pago, AMERICAN SAMOA —  Tropical Cyclone Yasa devasted the shores of the Fijian islands. It is said to be the strongest cyclone to hit the Pacific since Cyclone Winston in 2016. The category 5 cyclone took place in the heart of the holiday season on December 17, 2020 and left, thousands to bring in the new year without their homes and livelihoods.

The damage was widespread. Approximately 93,000 people were affected including four fatalities. Additionally, numerous homes were destroyed and, multiple schools damaged.

As an upshot of the heart wrecking cyclone, the American Samoa Fijian Community Association initiated a cyclone relief drive to allow the local community to contribute to our neighbourly islands of Fiji that was affected. This resulted with an outpoured of love and support both from and by the community as a whole.

In support of these local relief efforts, Bluesky donated $1,000 USD to the Fijian Community Association on January 9, 2021.

In addition to donating to local efforts, Bluesky coordinated an internal staff drive where the company matched employee contributions resulting in a further $2000 USD donation to the Vodafone Red Alert Foundation in Fiji to assist their continued efforts to rebuild communities affected by Tropical Cyclone Yasa.