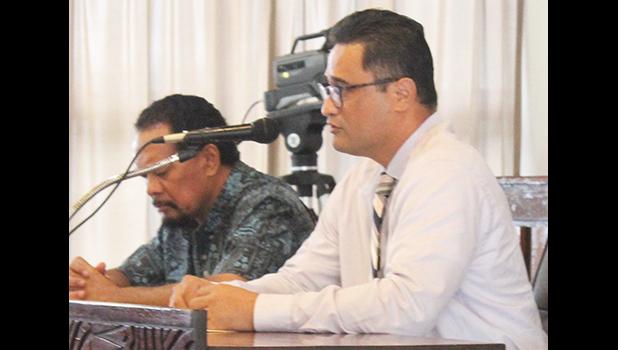 Pago Pago, AMERICAN SAMOA — Attracting outside investors - who have $1 million or $5 million - to invest in American Samoa, is the goal of an Administration bill that seeks to amend the current application procedures for foreign investment programs in the territory, said then-Attorney General Talauega Eleasalo V. Ale during his testimony before the Senate Rules Committee last Friday.

The bill was one of three measures the Administration submitted last October during the Fono Special Session, which lasted less than a week. While the Senate committee tabled its version of the bill, the House passed its version at the time and sent it to the Senate.

Taking up the House version of the bill, Talauega and Chief Immigration Officer, Peseta D. Fuimaono were called as ASG witnesses last Friday.

Talauega, who stepped down from the AG’s post that same day, said the bill’s goal is to attract new investors, including foreign investors, those with $1 million to $5 million or more, to invest in the territory. He said the bill amends several provisions of current law, giving the Commerce Department more responsibilities — and working along with Immigration — in reviewing requests from investors.

The proposed law requires complete background checks of investors, including those from foreign countries, he said, adding that the local Dept of Homeland Security will carry this out.

The bill also allows investors to submit applications and other documents electronically but are still subject to review by DOC and the AG’s Office, Talauega continued, adding that under this bill only investors and immediate family would be given permits to enter the territory, as well as investment partners, but not the workers.

According to the Lolo Administration, American Samoa has an existing program for vetting foreign investment enterprises and providing for a corresponding limited immigration entry permit. Furthermore, local laws on the foreign investment program have not been updated since 1991 and technological advances have made certain application requirements obsolete. “Investors will be attracted to a more streamlined and user friendly process,” it says.

Among the amendments proposed in the bill is deleting a section of the law on financial requirement, which — among other things — requires a financial report by a registered and certified public accountant and evidence that the applicant has made available or obtained financing for an investment of at least $1 million for an individual enterprise.

Under the proposed changes, a background report may be conducted by the local Department of Homeland Security and the Certificate of Foreign Investment from the Commerce director for the approved investment enterprise is issued.

Current law requires three reference letters of good character from non-relatives, but this provision is removed in the bill, and replaced with the requirement of a report on the applicant’s criminal history from the country of origin.