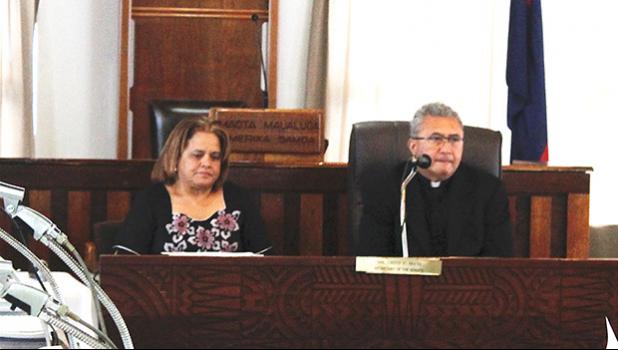 By
Fili Sagapolutele
fili@samoanews.com
I feel sorry” for ASCC but it’s up to the Governor, not the Fono ~ Sen Magalei

Pago Pago, AMERICAN SAMOA — The American Samoa Government is allocating only $1 million in general fund subsidy to the FY 2020 proposed budget of the American Samoa Community College (ASCC) and its president, Dr. Rosevonne Pato contends that this is not sufficient, saying the subsidy has continued to decline over the past 6 years.

She did express appreciation to the Fono for passing last year an Administration bill, which become effective in January this year, allocating a certain percentage of the tobacco tax to provide additional funding for ASCC.

Dr. Pato — who was accompanied by senior ASCC personnel and the Board of Higher Education vice chair, Monsignor Viane Etuale— made the statements during a hearing for the ASCC’s FY 2020 proposed budget of more than $10 million last week before the Fono Joint Budget Committee.

Besides its budget book, ASCC also provided a written separate report, covering among other things, the ASG subsidy, which Dr. Pato says is much lower than what the current law mandates, as passed in 1992. (ASCC raised the same issue at last year’s budget hearing).

She said ASCC, whose budget proposal was approved by the Board, is not putting through a budget of $1 million because the Board approved the $3.9 million to be presented to the Fono.

Gov. Lolo Matalasi Moliga signed into law last October (effective early this year), a hike on the excise tax on tobacco products, and earmarked 11% of revenues collect to ASCC. Lolo said at the time that revenue collections from this bill “will provide secure, earmarked funding for ASCC”.

Between January and July this year, ASCC received $673,436 as its share of the tobacco tax and Pato thanked lawmakers, saying the revenue from this tax has “definitely assisted us... in being able to cover payroll as well as other areas.” It has been calculated and proposed that ASCC would receive about $1.5 million annually from the tobacco tax, according to the report.

ASCC offered recommendations of areas of funding sources for the ASG subsidies:

•     possible increase of the current 11% share of the tobacco tax;

Pato cited two reasons why the college observed a “decline in enrollment”. The first one is that “we had competition at that time, with other colleges entering into the territory.” The other reason is that the ASCC budget “continues to decline” resulting in the college not being able to “expand and grow and develop our programs.”

“Students often go elsewhere, particularly online for programs that can offer the things they want, to get into career paths that they choose,” she said.

ASCC’s president shared with the Fono its fiscal year challenges, which were first presented at last year’s budget hearing. Among them is that ASCC’s academic year begins in August — which is the 4th quarter of a fiscal year — while the ASG’s new fiscal year starts in October.

“This is a big challenge for us because we can only operate with the monies that come in at the end of the fiscal year,” while the annual budget for the next fiscal year is approved around late September and “most likely we do not begin receiving our subsidy until about mid-October,” she explained.

ASCC has been “very strict” on cost containment. “And that’s how we have been able to operate with the very limited budget that we have.” She said the College has stopped all travel, except professional travel and it has also held back on faculty reclassification, which is “very necessary, especially now” that the ASDOE has reclassified its teachers — some of whom are paid more than ASCC faculty, she said.

In past years, Pato continued, ASDOE teachers would come to ASCC because of its good salary but that’s no longer the case, as some college staff now want public school teaching positions, which pay more.

Sen. Magalei Logovi’i, co-chair of the joint committee said he doesn’t know what to say. “I feel sorry for you. The money that goes to the college is not under our jurisdiction, it’s under the jurisdiction of the governor.”

When asked if the Board made this same presentation to the governor, Pato said yes, it was the Board and the ASCC leadership who made the presentation,

When asked by another lawmaker if ASCC questioned the Administration on why the subsidy is reduced, Pato responded, “We have gone before the governor in the past 6 years and the governor has said that he can only provide to the college whatever is collected. And if not enough it collected, he can’t give us anymore. That was the justification.”

Magalei, a former ASG Treasurer, told ASCC officials that “this is not a new problem with you. Every year you face this kind of problem.” He explained that even though the law allocates a specific amount for the college, if there is not sufficient cash collected by ASG, not all of the money is paid,

“The college is not the only [entity] funded under the general fund. There are others,” he said, and noted that the Governor’s Special Program has a budget of $23 million, and to him personally, “some of that should be diverted to the college. But that’s under the governor’s jurisdiction, not the Fono.”

“We only introduce the law and approve it to help you out. When it comes time to giving money to you, we’re not the ones that give money to you. I don’t know what else I can say, we just pray and hope that someday something will happen,” he concluded.