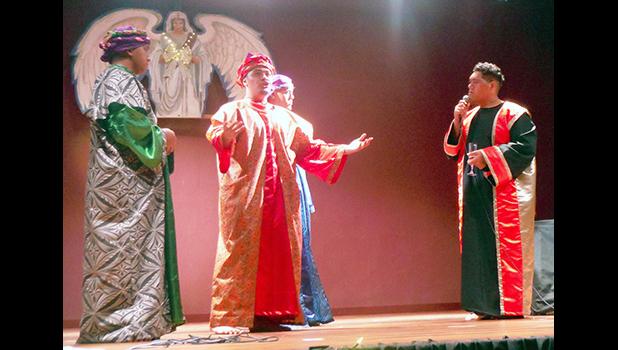 Pago Pago, AMERICAN SAMOA — Just prior to the declaration of the Territory’s current State of Emergency, students taking Fine Arts classes at the American Samoa Community College (ASCC) enlivened the holiday season with their stage production “Iesu le Mesia”, a celebration in the Samoan language of the birth of Christ.

The play, which combines drama and music, gave the students of fall 2019 Fine Arts classes including Introduction to Drama (DRA) 150, Art History Survey (ART 150), and Concert Choir (MUS 170) an introduction to the world of theater while using their talents to share a message of hope in a time of crisis for the community.

Last week’s two performances actually marked the second time ASCC has staged “Iesu le Mesia”. The first production of the play took place in 2000, when the composer of its music and lyrics, Namulauulu Dr. Paul Pouesi, still taught music at the College. Namulauulu co-wrote the play with his brother Daniel Pouesi, who developed the script, and sister Alitasi Pouesi Summers, who edited their work into its final form. All three Pouesi siblings now reside in California and remain active in music.

According to Tuiasosopo, “Iesu le Mesia” provided the Fine Arts Department with an ideal first theatrical production to stage in the ASCC Multipurpose Center. “Since this would be our first production on the stage of the new auditorium, we wanted to do something of a smaller scale so that way we could get an idea of how big or small of a production the stage can fit,” he explained. Tuiasosopo also noted that none of the cast had prior stage experience, so the experience of joining the cast in a production like this not only gave them confidence in their own abilities, but also fulfilled the Fine Arts Department’s program learning outcomes, which include exposure to the creative process and an introduction to exhibiting and/or performing works of art.

Tuiasosopo stressed that bringing a production like “Iesu le Mesia” to the stage involves contributions beyond those of the Fine Arts instructors. “We owe a debt to the parents of our students for letting them attend rehearsals after-hours and on weekends,” he said. He further acknowledged crucial support from Ngare Ho-Ching and Nadine Solofa Taufaasau of ACE Hardware for supporting the production with materials for the set, and Sunrise Sewing Shop for its work with the costumes for the cast.

Finally, Tuiasosopo credited the efforts of the students involved. “They have come a long way, and we are very proud of them,” he said. “We look forward to working with those who’ll return next semester, as well as the incoming students for the next Fine Arts department musical production.”

For more information on Fine Arts classes at ASCC, see the College’s catalog online at its website <www.amsamoa.edu>