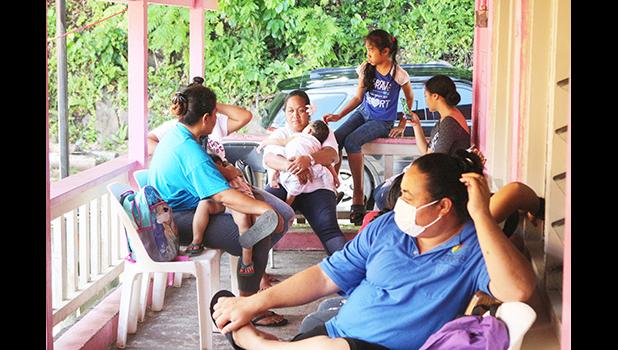 Pago Pago, AMERICAN SAMOA — Visitations at the Territorial Correctional Facility (TCF) are “suspended until further notice” due to American Samoa being under an emergency declaration because of the measles outbreak, said Police Commissioner, Le’i Sonny Thompson at last Sunday’s emergency cabinet meeting.

“TCF is under lockdown until further notice or until the Emergency Declaration is rescinded. Families and visitors are permitted to drop-off only at the entrance gate,” according to the DPS presentation.

“We have more than 210 inmates at TCF [and] we’ve made some changes; if you have folks at TCF, and you bring in food, or things of that sort,” Le’i said, directing the explanation to the public watching on KVZK-TV. “There’ll be a table outside at the front gate, leave them there. The correctional officers will be there and we’ll make sure the inmates get it. All visits for TCF are suspended until further notice,” he said.

(Since the broadcast, several local residents have questioned whether the inmates “will actually get the food” or would it end up somewhere else.)

Since last Friday afternoon, when Health officials declared the measles outbreak, and public gatherings were temporarily halted, Le’i said police have been “canvassing the general population, making sure” everyone abides with what was announced that Friday afternoon.

Among the areas covered by police since last Friday night are bingo halls, nightclubs, youth activities, picnics in public parks, and other such events. “Businesses and retail stores continue operations; however, restaurants which host parties, weddings, and functions with large gatherings, are suspended until further notice, or when the declaration is rescinded,” he said.

The ASG-organized “Fesoasoani Alofa mo Samoa Fundraising” will continue at approved locations, he said, referring to the Fale Samoa at Utulei Beach, and more than 5 drop-off locations on Saturdays.

He made clear — following some confusion when the first announcement was made last Friday afternoon — that “all church services are permitted to continue at the discretion of the village council or congregation.” The governor, through the emergency declaration, called on all village councils to enforce crews and discourage public gatherings.

The DPS Marine Patrol Division is working with three other ASG agencies in patrolling the territory’s 50-mile territorial waters. The governor has directed DPS to dispatch two police officers to all 13 village sites for the mass vaccination in the coming days.

Le’i said DPS doesn’t have enough officers to man all 13 sites and requested the help of village councils and mayors. He said the public has been supportive of their work, although there was some confusion in the community at the beginning.

The final briefing at the cabinet meeting was ASDHS, whose director, Samana Semo Ve’ave’a gave an outline of operations at the now activated Emergency Operations Center.

Cabinet members were informed that “all logistics goes through the EOC” and not the Health Department, which has the lead during the emergency declaration.