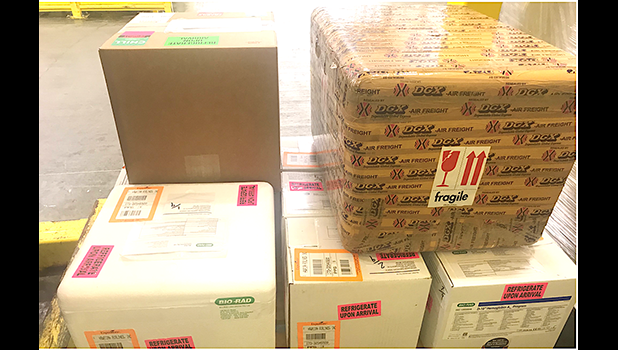 Pago Pago, AMERICAN SAMOA — In an effort to contain further spread of measles in American Samoa, the Health Department will “launch an all-out mass vaccination” from Dec. 13-20, with a target of more than 12,000 local residents, especially those who were not born here but have lived in the territory for years and don’t have proof of MMR shots.

This is according to DoH’s presentation by DOH director Motusa Tuileama Nua and DOH epidemiologist Dr. Aifili John Tufa during Sunday’s cabinet meeting, where additional details were provided about the 4 locally transmitted measles cases.

During the presentation, Dr. Aifili provided additional details on the nine confirmed cases, five of them “travel associated” — individuals who were most likely exposed in their country of origin and then traveled to American Samoa. Of the five, two of them were children — who arrived here on Oct. 31 and three adults — who arrived later.

Based on last Friday’s DOH announcement, Samoa News reported that 4 were locally transmitted cases. At Sunday’s presentation, Aifili said three of the local transmissions were “laboratory confirmed” — meaning they were confirmed by a lab in Hawai’i where the samples were sent to be tested.

The 4th locally transmitted case was a six-month-old infant whose lab test results are still pending but was “clinically” confirmed here. “Because of this child’s symptoms, we are declaring this a confirmed case as well — clinically confirmed,” he said.

The 3 who were laboratory confirmed included a male, 35; female ,26;  and a 10-month-old infant. He said the 6-month-old infant is the only one currently with measles but recovering well, while there  have been no new cases since last Saturday.

“For us, our threshold to declare an outbreak is two laboratory confirmed measles cases. So, we surpassed that point,” he clarified. He explained the process DOH goes through when it identifies a suspected measles case. “We do contact tracing”, going back to where the person is suspected of being infected and the people that individual came in contact with —  checking immunization records and if they’re not immunized or have no record of immunization, a MMR vaccine is administered.

For the 9 confirmed cases, “We completed contact tracing for about 110 people from 6 different villages”. And of the 110 people, DOH administered the vaccine to 45 of them — 6 children and 39 adults.

“I want to point out that the adults, most of them were not born here, they were born elsewhere, moved to American Samoa, and therefore, there is no record of their vaccine history,” he said.

Since the first declaration was issued Nov. 13th, DOH has heightened its immunization program, administering just over 3,000 MMR shots at various locations up to Dec. 7th, according to data provided in the presentation.

Aifili said the high number of administered MMR shots “shows how many of our population, especially those who were not born here, have not been immunized. This number also reflects the students in school, either they’ve not completed their MMR vaccination (which is two doses), or one dose of MMR.”

DOH also provided summary data of “MMR Coverage Overall” for students in daycare, ECE, elementary and high school. Overall count for kids is 13,805 but only 13,431 — or 97.3% — have received their first MMR dose.

Aifili said that based on the data, there are still children who haven’t received their first or second doses and DoH wants to bring those numbers up to “above 90%”  — for the second dose. Another set of data presented by DOH is the “number of records of individuals we are currently tracking” - an estimated 47,320 people.

He explained that DOH’s WebIZ data records are individuals who were immunized here since the 1970s. However, he added, people have traveled and some have moved away since then. He pointed out that the numbers in DOH records do not reflect the population that moved here, not born here, but have lived here for the past 10-20 years.

“That population is not captured here and that is the concern,” he said, and explained that during DOH’s “contact tracing, we found out that there was a group from Apia that came to American Samoa.”

Among the group was a lady, who wasn’t sick when she arrived. She got sick while here, but didn’t go to LBJ Medical Center nor report it to DOH. The lady then got another person sick — which was also not presented to LBJ nor reported to DoH. And this person got the 35-year-old male sick (which is one of the locally transmitted cases), which then got the 6-month-old sick.

“So the concern is, we believe this is not an isolated event and there's probably multiple situations like this going on throughout the territory, where travelers are here, two days later get sick, and then don’t come into LBJ or report to DOH,” he said. “And we would not be able to track that, and we’re unable to estimate this population.”

With these concerns, Aifili said it was recommended to Motusa that "we start a mass vaccination" focusing on the population who were not born here, especially adults. DOH gave the estimated population number targeted for the vaccination plan at 12,481 people, who are individuals who may need the MMR shot. Among them is an estimated 10,000 adults, and the rest are children — between 6 to 12 months (about 774) as well as school children who need the first or second MMR dose.

Between Dec. 8-12 — it’s vaccination for school children, who are not in compliance with required doses; infants between 6-12 months old; and first responders. The shots are available at DOH clinics in Tafuna and Fagaalu but they’re looking for another site to help vaccinate this particular group.

Dec. 13th — DoH will “launch an all out mass vaccination” through Dec. 20th, utilizing DOH’s 6 clinics (including 2 in Manu’a) as well as the 13 sites — in villages — which were created due to “contact tracing”.

DOH “does not have the people or resources to man the 13 sites,” he said, adding that LBJ is providing support, along with retired nurses who still have the “can do attitude” and have come on board to help. DOH will also bring in ASCC student nurses.

Extra  tents are being planned for the sites to “avoid close contact” with visiting people. With the planned mass vaccination, Gov. Lolo Matalasi Moliga has directed 2 senior ASG officials to ensure that each of the 13 sites has a vehicle to assist personnel assigned there. He said to use all available ASG vehicles and, if necessary, work with local car rentals to get the needed vehicles. He suggested getting 2 vehicles from each of the 7 car rentals on island to provide a "car pool".

Although Department of Public Safety has already taken on additional duties during the emergency declaration, Lolo requested that one officer be stationed at each of the 13 sites, and he requested the support of the pulenu’u and village police.

He told cabinet members that ASG Treasurer Ueligitone Tonumaipe’a has already set up a special account to cover expenses relating to the emergency declaration and a process is already in place on payments.

He said final approval comes from the Governor's Office with a voucher so payments are issued. Processing of payments shouldn't take two days and he urges support not only from ASG agencies, but the community, during the mass vaccination.