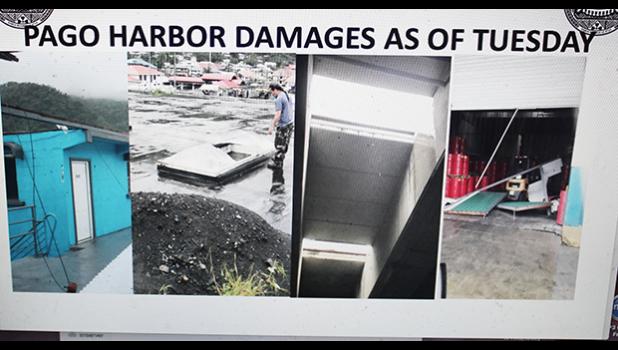 Pago Pago, AMERICAN SAMOA — Schools are scheduled to reopen today, businesses will be back in full operation as well as normal government operations, after two back-to-back storms caused disruption on island, which first began, Feb. 16th with damaging winds from a monsoon trough — that continues to linger to the north.

And the National Weather Service in Pago Pago moved quickly to quash on-going wide-spread rumors on island of another tropical storm system, which was to follow Tropical Storm (TS) Wasi, that lingered about 110 miles from American Samoa early Saturday morning, before it moved south and away from the territory.

“Again, there is no other tropical cyclone system behind TS Wasi,” according to a message posted Saturday on the weather office Facebook page and a similar message was reiterated by forecasters during ASG weather update briefings on Saturday and yesterday morning at the Emergency Operations Center, as well as with interviews on local broadcast stations.

Forecasters from the local weather office point out that as “an active monsoon trough continues to linger near our islands” the local weather office “has been diligently monitoring for not only tropical cyclone development within our area of responsibility (within 300 nautical miles), but also systems of heavy rains that could result in flash flooding and non-tropical cyclone systems that could bring damaging winds” similar to damaging winds on the weekend of Feb. 16.

Forecasters urged the public to remain alert and prepared through April as “we are still in our Hurricane Season.”

Following one-whole week of non-stop heavy rain and damaging winds, local authorities and forecasters are concerned that “any additional heavy rain may trigger more mudslides along the territory,” and have again cautioned residents to remain alert.

So far, all schools are scheduled to reopen today. During the 4p.m. weather update briefing at the EOC on Saturday, Education director Dr. Ruth Matagi-Tofiga reports that 99.9% of all public schools have electricity, with the exception of Olosega Elementary School in Manu’a.

According to the American Samoa Power Authority, the electric meter socket at Olosega school was flooded last week and needs to be repaired. ASPA, along with Public Works is working on sending a crew to Manu’a once there is confirmed air service to the island group.

Matagi-Tofiga reports that water is 100% operational for all public schools; 86% of them have working landlines and 79% have internet.

ASG is hoping to get these services fully restored now that the winds have died-down and assessment work as well as repairs can be completed.

Schools that were used as emergency shelters have already been cleared with families moving out as of Saturday afternoon. The family members staying at private shelters — at church halls — have also started to return to their homes or to stay with relatives.

As of Saturday evening, the Public Works DOE Maintenance Division reports that there were no major damages to school buildings; except facilities were wet from the rain. There is however, a need for minor fixes for doors to classroom.

It also reports pending issues, which need to be addressed at Vatia Elementary School, the Administration building at Samoana High School and Tafuna High School special education classroom (which doesn’t have any classes pending there).

Hawaiian Airlines announced Saturday evening that it will not operate an additional flight to accommodate passengers who were affected with the cancellation of the Feb. 20th flight. Instead these passengers are being re-accommodated on the Feb. 24th and Feb. 27th flights.

For the inter-Samoa and Manu’a flights, those are being determined by the airlines themselves. Travelers are asked to contact the airlines directly for updates and not the EOC, which does not have flight schedules.

The Port of Pago Pago also reopened Saturday afternoon, allowing two container vessels, with much needed supplies, to dock. The cargo vessels, Southern Lily and Tropical Islander, were forced to wait out on the open sea when the port was closed Friday as TS Wasi was approaching the territory.

Port Administration is awaiting word from the Samoa government of when the Fotu-o-Samoa will be able to sail here for the two-charters to Manu’a. The Fotu-o-Samoa’s trip last week was cancelled due to severe weather conditions not only in the territory but in Samoa as well.

On Friday afternoon the American Samoa TeleCommunications Authority (ASTCA) reported that services were 99% up heading into bad weather Friday night. ASTCA reported that its landline, Internet, and mobile phone services were all fully operational, with the exception of its CDMA mobile network in Ofu village.

ASTCA’s 30 other cell sites serving almost every village in Tutuila and Manu’a were operational as of Friday afternoon.

As of Friday about 250 individual customers (<3% of total) were without ASTCA landline and Internet service due to storm-related problems with the “drop line” that connects their individual home or business to the fully operational ASTCA network. Their lines will be repaired this week as the weather improves.

ASTCA CEO Lewis Wolman said in a media release, “The patience of the public, and the cooperation of our First Responder partners and the ASG Emergency Operations Center (EOC) are deeply appreciated.”

ASG is expected to continue damage assessment today, weather permitting and the public is asked to please be patient as government entities, such work diligently to restore service as quickly as possible under safe conditions.

Samoa News will provide any urgent updates online and on our Facebook.