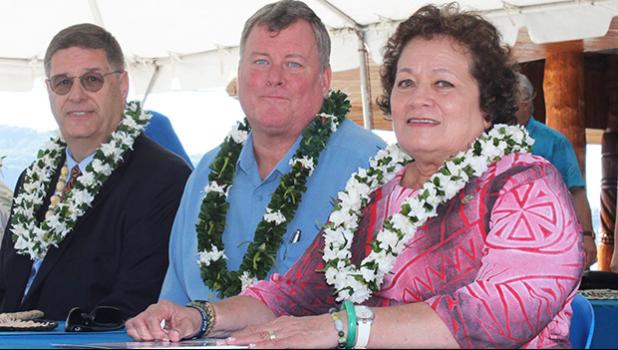 Pago Pago, AMERICAN SAMOA — After serving American Samoa for nearly five decades, Bank of Hawaii officially closed all its local operations at the close of business last Friday; and yesterday, the territory officially bid farewell to the bank, during the government-sponsored “Bank of Hawaii Exit Ceremony” at Suigaula ole Atuvasa Beach Park in Utulei.

“I have such mixed emotions because I am saddened by the departure of an integral member of our American Samoa family, as well as a business partner who played a major role in building our economy and raising the quality of life of our people” Gov. Lolo Matalasi Moliga said in prepared remarks released prior to yesterday’s ceremony.

Lolo reiterated similar sentiments during his remarks at yesterday’s ceremony, which included BoH officials from Honolulu, as well as the last of the seven BoH employees who manned the Tafuna branch, when the main branch in Utulei was closed some four years ago.

Although BoH has left the territory, the governor said he hopes “our relationship will continue.”

Lolo said the ceremony was two-fold: to “bid farewell” to BoH after serving American Samoa for nearly 50-years; and the official transfer of BoH service and assets to the ASG owned Territorial Bank of American Samoa (TBAS) that was set up after BoH moved to close down local operations.

BoH helped “improve our economy and the lives of our people,” Lolo said, and commended the Fono, cabinet members, businesses, and community for their strong support in getting TBAS up and operational before BoH’s official departure from the territory.

To the TBAS board of directors, the president and CEO, as well as the bank’s management, Lolo said the banking service needs are “now in your hands. It’s up to you to make it, or break it.”

[l-r] Territorial Bank of American Samoa board chairperson, Olivia Reid, and board members Leilua Stevenson and Salaia Gabbard  before the start of the government sponsored “Bank of Hawaii Exit Ceremony” at Utulei Beach yesterday. [photo: FS]

In his prepared remarks, Lolo thanked BoH board chairman and president Peter Ho for agreeing in early 2013 to keep operating in American Samoa until TBAS is up and running — although BoH announced in November 2012 it was closing down in March 2013.

“Chairman and president Mr. Peter Ho’s and the Bank of Hawaii’s faithful and generous services to the people of American Samoa will be forever etched and engraved in our peoples’ souls, hearts, and minds, and it will be perpetuated and memorialized in our history for future generations “ Lolo wrote in his prepared remarks released Monday this week.

Among the BoH officials who arrived Monday night for the ceremony was bank vice chair Mark Rossi and senior vice president Hobbs Lowson, who previously headed BoH’s local operations for many years.

Rossi offered special remarks as well as a presentation of a traditional Hawaiian bowl to the governor, who in return also offered several gifts to BoH.

Among the gifts presented by First Lady, Cynthia M. Moliga to Bank of Hawaii vice chairman, Mark Rossi yesterday during the government sponsored “Bank of Hawaii Exit Ceremony” at Utulei Beach, was a Samoan painting for display at the BoH headquarters in Honolulu. [photo: FS]

Speaking on behalf of the TBAS board and employees, TBAS president and chief executive officer Drew Roberts expressed his “appreciation for the diligence and contribution” by BoH to American Samoa.

“Mahalo (which means ‘thank you’ in Hawaiian),  almost seems insufficient to express our gratitude for years of service and for the friendships I have personally made during the past six years” with BoH, he told the gathering, which included cabinet members.

He said this new chapter — in the banking history of the territory — could only come about by the tenacity of the people of American Samoa, personified in the administration of this Governor, and in conjunction with a dedicated partner — the Bank of Hawaii.

“As I looked over the list of assets you [BoH]  have so graciously left behind, I was struck not by the buildings, furniture, or even the equipment, but rather one of the most prized possessions anyone on the island will recognize — a truck,” he said to laughter from the audience. “Knowing my people, that will be pampered more than any other.”

To BoH: “Rest assured your legacy will live on here. I am proud of the progress banking has made leading up to this day. We all will look back on the era of Bank of Hawaii with fondness,” said Roberts. I “personally appreciate our working relationship and hope it continues into the future.  TBAS wishes you all the success you rightfully deserve.”

Also at the ceremony, Senate Secretary Leo’o Va’a Ma’o read  aloud a Senate Joint Resolution, approved by the Fono, expressing appreciation to BoH for its many years of service in the territory and for their support in setting up TBAS.

Bank of Hawaii senior vice president Hobbs Lowson (far left) along with the last remaining 7 employees of BoH, who kept the bank’s Tafuna branch operational, until it was officially closed last Friday. They were offered a special blessing by Monsignor Viane Etuale, during the closing prayer of the government sponsored “Bank of Hawaii Exit Ceremony” Tuesday at Utulei Beach. [photo: FS]