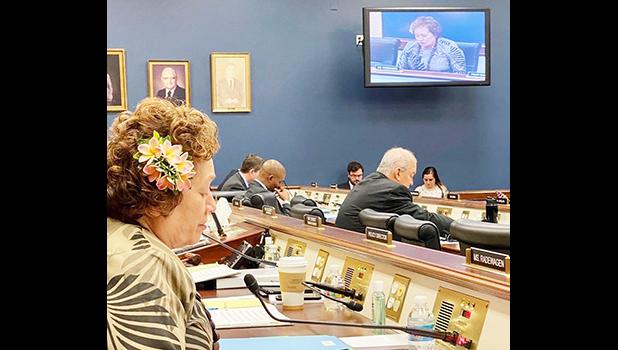 Washington, D.C. — Congresswoman Uifa’atali Amata is an original cosponsor of legislation supporting establishment of a new committee of Veterans from throughout the five U.S. Territories and the three Freely Associated States to better advise the U.S. Department of Veterans’ Affairs (VA) on Veterans’ issues affecting the insular areas.

The bill would create the VA Advisory Committee on the U.S. Outlying Areas and Freely Associated States, comprising Veterans from American Samoa, CNMI, Guam, the U.S. Virgin Islands, Puerto Rico, the Federated States of Micronesia, the Republic of the Marshall Islands, and the Republic of Palau.

“Once again, all the representatives from the territories are working together for an improvement that would benefit all of our islands,” said Congresswoman Amata. “We have a commitment to our Veterans, and getting their direct advice and input could facilitate better communication and results. Thank you especially to my friend, Congressman Sablan, for his leadership on this legislation.”

This advisory committee would advise the VA Secretary on the availability and accessibility of services and benefits within the insular areas, and take part in discussions regarding how to improve that distribution of services and resources in these areas.

“I’m pleased to see this accountability reform bill gather strong support and pass the House,” said Congresswoman Amata. “Through these transparency measures, we can put our Veterans first and make data available that can better serve both our Veterans and VA Police. Thank you to Rep. Rice for her leadership throughout this effort.”

“Across the country, there are reports of inappropriate conduct and a troubling lack of oversight and transparency among VA police force,” said Congresswoman Rice. “Our veterans deserve much better from the agency that exists to serve them. My bipartisan bill will address shortcomings in VA’s police force by requiring police officers to wear body cameras and enacting other important measures to strengthen oversight and accountability. I thank my colleagues in the House for supporting it today to help us better serve and protect our nation’s veterans.”

The VA Police Improvement and Accountability Act seeks to reform several shortcomings regarding current VA police policies and procedures that were exposed in a House Veterans’ Affairs Committee hearing on June 11, 2019, which was held following an incident when a veteran was mistreated and injured by VA police at the Northport VA Medical Center on Long Island.

Specifically, the bill would:

Following passage in the House this week, the bill must next be passed in the U.S. Senate before it can be signed into law.