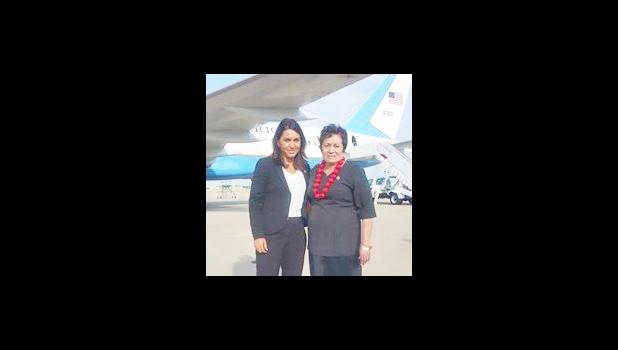 Washington, DC —  Congresswoman Aumua Amata hailed the success of a bipartisan request to the Department of Homeland Security (DHS) regarding its administrative rules which placed undue constraints on Compact of Freely Associated States migrants seeking to obtain REAL IDs.

The DHS has responded with a change in those requirements to remove unnecessary barriers to the benefit of those living or working in the U.S. from these valued Pacific allies.

The effort was led on the House side by Dean of the House, Congressman Don Young (R-Alaska) and Congresswoman Tulsi Gabbard (D-Hawaii), and on the Senate side by Senator Mazie Hirono (D-Hawaii).

In 2018, the REAL ID Act Modification for Freely Associated States Act, H.R. 3398, was successfully passed into law with bipartisan backing, led by Congressman Young and co-sponsored by Congresswoman Amata, who gave a Statement for the Record. This week’s DHS announcement will help put that Congressional intent into practice.

“Thank you to each of these Senators and Representatives, especially to my friends Dean of the House Don Young and Congresswoman Gabbard for their leadership, pulling together bipartisan support in the House,” said Aumua Amata. “I also appreciate the DHS considering this matter and taking this important action at our request.”

“I am so pleased to see this much-needed change in policy for U.S. residents from the Freely Associated States, among our nation’s closest friends and allies,” continued Congresswoman Amata. “I lived in the Republic of the Marshall Islands for eight years, and all three nations are key Pacific partnerships with the United States.”

This announcement reverses guidance previously released by U.S. Citizenship and Immigration Services that required FAS citizens of the Federated States of Micronesia, the Republic of the Marshall Islands, and the Republic of Palau residing in the United States (U.S.) to present a visa or Employment Authorization Document (EAD) in order to receive a REAL ID Act-compliant driver’s license.

Under decades-old treaties with the U.S. known as the Compacts of Free Association (COFA), FAS citizens are able to live and work in the U.S. indefinitely as non-immigrants without having to obtain a visa or an EAD card. The requirement for FAS citizens to suddenly obtain an EAD to renew their driver’s licenses put many at risk of losing their employment, given the delay and burden of applying for and receiving an EAD.

“Since the administration first announced the decision to require visas or EADs for FAS citizens, I’ve heard directly from employers, grassroots organizations, county and state agencies, and FAS citizens living and working in Hawaii about the significant and unnecessary financial hardships that this community faced in obtaining the identification they need and are legally entitled to possess,” Senator Hirono said. “This announcement was welcome news for thousands of FAS citizens living in communities across our country, and I want to thank the bipartisan group of my colleagues for joining the effort to ensure we meet our special obligations under the Compacts of Free Association, which recognize the important national security partnership between the United States and the Freely Associated States.”

“While FAS citizens lawfully reside and work in the United States, they have been subject to a host of barriers when trying to acquire a REAL ID-compliant driver’s license or identification card,” Congressman Don Young said. “I have been engaged in correcting this issue legislatively for some time, including passing my bill, the REAL ID Act Modification for Freely Associated States Act, last Congress. I am pleased to see the Department of Homeland Security has agreed to allow FAS citizens to obtain REAL ID-compliant ID cards using the same requirements as citizens in the rest of the country – a U.S. passport and I-94 forms. I would like to thank Senator Mazie Hirono for partnering with me on this important national security issue. I will keep working in Congress to ensure REAL ID-compliant licenses are issued as efficiently and consistently as possible. ”

“I’m pleased the Department of Homeland Security is fixing the process to allow Marshallese living in Arkansas and across the U.S. to obtain secure driver’s licenses and ID cards,” Senator Tom Cotton said. “I’ve long pushed for this reform, which will make life easier for Marshallese and help fully implement REAL ID.”

“This announcement ensures that the Marshallese community living in Arkansas and across the nation will no longer face unintended barriers to obtaining proper identification,” Congressman Steve Womack said. “The Marshallese people are part of the fabric of our state, and this decision supports the great relationship we have built and shared. I’m pleased that bipartisan, bicameral advocacy has led to real change that will support citizens of Freely Associated States living in the U.S. and the cities where they reside.”

“I am pleased to see this important change in policy for U.S. residents from the Freely Associated States, among our nation’s closest friends and allies,” Congresswoman Aumua Amata said. “I lived in the RMI for eight years, and these three nations have valued partnerships with the U.S.”

“Our Compacts of Free Association with the Federated States of Micronesia and the Republics of Palau and the Marshall Islands are of key importance to all of our countries,” Congressman Ed Case said. “The Compacts permit COFA citizens to live and work in our country with a valid passport and documentation of entry under the Compacts. They should not have been required to comply with onerous additional requirements to obtain a driver’s license and access other basics of everyday life, and I appreciate the administration reversing course on a matter critical to COFA citizens.”

“I applaud the responsiveness of Senator Hirono and other Congressional allies and the Department of Homeland Security on this matter,” Esther Kia‘aina, Executive Director of the Pacific Basin Development Council said. “I look forward to working them on addressing long-term community issues that also adversely impact the quality of life for citizens from the Freely Associated States living in Hawaii and elsewhere in the United States.”

Previously, FAS citizens residing in the U.S. were only able to receive temporary driver’s licenses and state identification cards, forcing them to renew annually. This often meant that FAS citizens were excluded from employment, housing, transportation, schools, and other opportunities afforded to non-immigrants. Senator

Hirono worked to advance the REAL ID Act Modification for Freely Associated States Act of 2018 that unanimously passed the U.S. Senate and was signed into law. The intent of this legislation was to ensure that FAS citizens in the U.S. could receive full-term REAL ID Act-compliant identification documents without a visa or EAD.

This announcement follows a bipartisan request from five Senators and seven members of the House of Representatives for DHS to change the guidance.

In October 2020, REAL ID Act-compliant identification or other acceptable forms of identification will be required for every person accessing federal facilities and traveling domestically on a commercial airline.