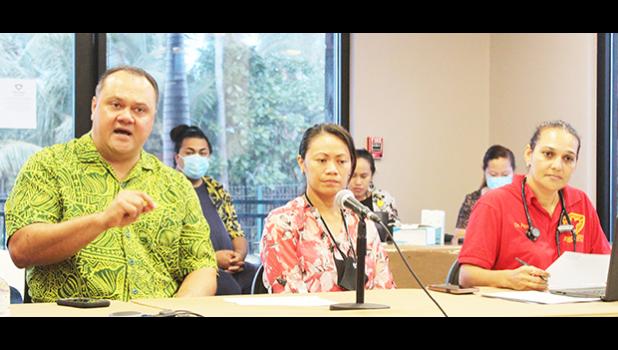 Pago Pago, AMERICAN SAMOA —The 259 passengers who arrived on the Sept. 13th flight from Honolulu and are currently in quarantine, are set to be released this weekend, but after release from quarantine they will be required to remain at home for two days and abide with specific protocols, according to Health Department officials during a news conference on Tuesday, providing the medical side of the update on the travelers, including the passenger from that same flight who tested positive.

The second test for passengers in quarantine at Tradewinds Hotel and Sadie’s by the Sea hotel was done on Monday and all came back negative. The third test is today, Sept. 23rd with their release to go home set for Sept. 26th, said DOH officials.

However, the one-passenger — who is a local resident and fully vaccinated before traveling to the U.S — tested positive for COVID-19 on Sept. 16th, which has caused concerns throughout the territory.

Dr. Aifili Tufa, the territory’s lead epidemiologist with DoH, assured the public that the virus is contained and been kept from spreading to the community, with the current protocol in place, such as the 14-day isolation for the traveler and monitoring by medical personnel.

“We are confident that the virus has been contained and at this point, it’s not necessary for contact tracing, or case investigation in the community at this time,” Dr. Tufa said. “Everyone who worked the airline [on Sept. 13th] and even the quarantine sites are all embedded in the bubble.”

He stressed that all individuals and all those concerned that might have been exposed to the virus have all tested negative including the Public Works Department staff who transported the passengers to the quarantine sites.

For the traveler in isolation, the individual will not be re-tested again — based on U.S Centers for Disease Control and Prevention (CDC) guidelines, according to DoH’s Clinical Service acting director Dr. Elizabeth Lauvao.

In accordance with “CDC guidelines once you test positive, there’s no need to re-test the positive case,” she said, noting that unless the medical team comes up with a reason for re-test following any discussions.

“Based on the CDC guidelines once [the person] completes the 14-day isolation, the passenger will be released, but we still need to monitor the passenger,” she explained. Additionally, DoH has prepared protocols to follow-up on the passenger, when the traveler “is discharged to the community”.

Dr. Tufa re-confirmed the CDC guidelines, saying that once the person is tested positive, “it’s not necessary” to test the individual again.

“The reason why we don’t want to test them, again and again, is that we’ve seen, that it’s called a ‘historical positive’ — if we test the individual here for the virus, there could be a subsequent positive test later, even though this person is no longer infectious,” he explained. “What we’re concerned about is whether the patient is infectious. Because if you are infectious that means you can pass the virus to another person. A historical case that we test later, might show a positive, and is no longer infectious.”

And he emphasized protocols in place to protect the community and that the virus is contained.

Dr. Lauvao said the positive case is doing well and not showing any fever. She said the first symptoms that the traveler told the medical staff about at isolation - “is a loss sense of smell, which is one of the common symptoms for people” who are fully vaccinated.

When asked for details on the follow-up protocol once the traveler is released from isolation, Dr. Tufa responded that DoH is working with the ASG TalofaPass web-system. And there’s capability in the system that the traveler “can go in and do their daily checks, with a list of certain symptoms they can check to see if it’s there. And if it’s positive for any of those, we will then send a team out to do the assessment.”

He also says this is the same monitoring process for the rest of the passengers in quarantine upon release to go home. “We are going to enforce that home quarantine, for two days after release,”he said.  “We’re going to ask them to stay home and don’t go anywhere for two days and have them keep wearing their masks, and keep away from family members.”

And then from that period on, passengers will check in to the TalofaPass system twice a day — for a seven-day period. “We’re going to enforce this. What we mean is that, we’re going to tell the passengers, they need to go on this site and check in,” he said.

“If they do not check in on that day, then there might be other consequences that arise from that. We might pull them back to quarantine,” he said. “But we haven’t really established what that may be. But we will send a team out to find out what’s going on if they don’t check in. So those are the processes that we plan on putting in place.”

With the resumption of Hawaiian Airlines commercial flights between Honolulu and Pago Pago, the ASG COVID-19 Task Force eliminated the quarantine period in Hawaii that was used during repatriation flights. However, travelers entering American Samoa must register on the TalofaPass system 21-days prior to departure as well as take three separate tests that must be all negative.

However, there are still many in the community concerned with the virus making its way to the territory despite all these protocols including travelers being quarantined upon arrival here. And this is especially important now with the first positive case for American Samoa has occurred — even though it’s a ‘border’ case, not a ‘community’ case.

Asked for comments on these public concerns, Dr. Tufa pointed out the rigorous process that a traveler goes through before entering the territory especially with the mandatory three-tests that must all be negative

“If you test positive on these three tests, you are taken off the flight and wait 28-days to apply again to come here,” he explained. And reminded the community of another protocol in which all travelers are mandated to be fully vaccinated for those eligible for the vaccine.

He noted that this process “is a way for us to really let travelers know, that if you want to come to American Samoa, and when you start that 21-day process — when you register on the TalofaPass — you have to live a conservative life style, making sure you’re doing social distancing, wearing your mask, get your vaccines, so that you can go through the process without any blemishes.”

Dr. Tufa said that the virus is spreading all over the U.S and the world. “We have a very good system in place — not 100%. There is that chance the virus gets here and we saw that it’s here now. We’re containing it,” he said.