2020 Census shows a dramatic drop in Am Samoa’s population 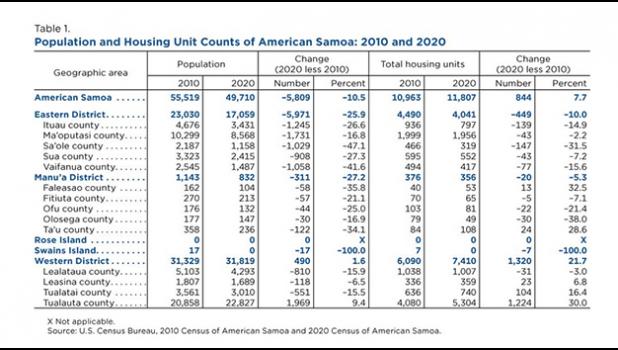 Pago Pago, AMERICAN SAMOA — The U.S. Census Bureau on Thursday released the 2020 Census population and housing unit counts for American Samoa and the three other island insular areas — Guam, the Commonwealth of the Northern Mariana Islands (CNMI) and the U.S. Virgin Islands.

These population and housing unit count data, as of April 1, are collected once a decade during the decennial census. The 2020 Island Areas Censuses counted people living in American Samoa, the Commonwealth of the Northern Mariana Islands, Guam, and the U.S. Virgin Islands. The Census Bureau conducts the decennial census in partnership with the Island Areas governments in compliance with Title 13 of the United States Code and to meet the specific data needs of the Island Areas.

American Samoa had the second smallest population of the four Island Areas at 49,710 people, a decrease of over 10% since 2010. Only the Western District of Tutuila Island saw its population increase since 2010.

Despite the declining population, the number of housing units in American Samoa increased by 7.7%, or 844 units. This was driven by an increase of over 1,300 units in the Western District.

The combined population of the territories of American Samoa, Guam, the Commonwealth of the Northern Mariana Islands (CNMI) and the U.S. Virgin Islands was just under 339,000, according to the first results of the 2020 Island Areas Censuses released Thursday.

In addition to conducting a count of people and housing units for all 50 states, the District of Columbia and Puerto Rico, the U.S. Census Bureau conducts the Island Areas Censuses to produce population and housing counts for each of the four Island Areas.

The four Island Areas each have different types of geographies. For example, there are villages in American Samoa and estates in the U.S. Virgin Islands.

Demographic, social, economic and housing characteristics — critical in understanding the ongoing changes and trends occurring in each Island Area — will be released in the future.