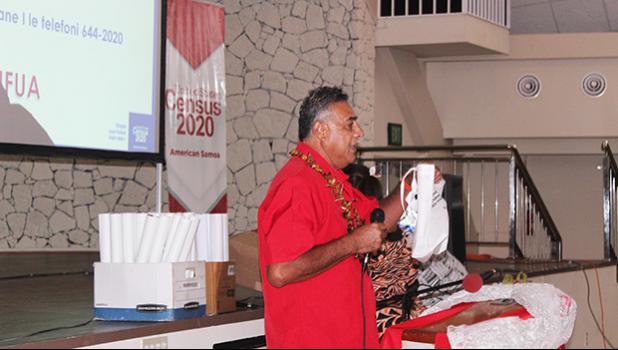 Pago Pago, AMERICAN SAMOA — US Census Bureau’s 2020 Census Advisor to American Samoa, Jason Kopp on Wednesday joined ASG leaders in urging all people residing in American Samoa — no matter the person’s immigration status — to fully participate in the 2020 Census to ensure an accurate and complete count for the territory as the data collected helps — among other things — funding for the territory.

And to ensure the census count proceeds as scheduled under the planned timeline, Gov. Lolo Matalasi Moliga has directed Human Resources and other ASG agencies to expedite the clearance needed for the 300 part-time enumerators to start working Jan. 27th.

In his remarks, Kopp noted that many cabinet members are familiar with the importance of data collected through the census. “You use it in your departments and your programs to make decisions. You use it to apply for federal funds and for grants,” he pointed out. “It’s even more important in American Samoa because we only collect the data once every 10 years,” while in the US, “we’re able to have ongoing surveys where we can update the data ever single year,” he explained.

For American Samoa, “this is our one chance to get accurate, complete data. So what we collect in 2020, we’re going to be using for the next 10 years, which makes it extra important,” he continued, adding that the Census Bureau “is committed to having accurate data.”

He said the Census Bureau “has chosen methodology that involves us going door-to-door for in-person interviews in every household in American Samoa to collect that data. That is the most expensive way to collect data but it’s also the gold-standard for collecting data.”

He said that the Census Office needs help from cabinet members in not only informing others about the census and data need, but the importance of having all residents participate. “When people realize that this data affects the funding that the program they rely on and their loved ones rely on, they’re much more likely to want to complete the data and want to make sure that we can get the most accurate data possible,” he said, adding that they are on track to start phase one of its operations next month.

Commerce director Fuiavailiili Keniseli Lafaele gave a background briefing on when ASG — through DOC — started negotiations in 2018 with the US Census Bureau for American Samoa’s 2020 census count and the $6.4 million allocated for the local operations.

He emphasized to cabinet members — as well as the public, through media coverage of the presentation — the importance of the census count as numbers help with funding allocations for American Samoa on various issues such as health and education.

Local Census Area manager, who is also the Census Office Manager Meleisea Vai Filiga addressed the importance of the census and types of data collected for it, which includes four categories — demographic, social, economic and housing.

He said accurate counts are important as these numbers are used in applying for federal formula grants. (Samoa News notes that these are competitive grants for which American Samoa competes with other jurisdictions.)

He explained specific information needed for each category including social data, in which a new question — which started in 2010 — asks about “grandparents as caregivers” in a household.

Meleisea explained that during the 2010 Census, the questionnaire form was delivered to households, people fill them out, and then census staff pick them up later. But for the 2020 census, enumerators will go directly to each household — talking to members of families, recording each family member in that household. Village mayors are asked to help Census staff, to ensure all household members of each family is counted.

Census office has already interviewed, tested, and hired — through the ASG Human Resources Dept — 300 part time enumerators, and training started Wednesday afternoon. Meleisea said phase one starts next month with address listing of all households in the territory while the actual count starts in March with enumerators heading into villages.

For the $6.4 million allocated for local census operations, he said only $600,000 has been expended.

Lolo reminded his cabinet about the importance of this once-in-a-decade event, as the results play a major role in the future economic viability of American Samoa. He then directed DHR, DoH, Budget, and LBJ Medical Center to expedite clearances for the 300 enumerators, whom he said should start working on Jan. 27th. Lolo gave these agencies the rest of this week and all of next week to get all the clearances done.

With only $600,000 spent so far of the $6.4 million allocated for local census operations, Lolo said getting these people on board will get that money, available from the feds.

The governor requested Secretary of Samoan Affairs Mauga T. Asuega for village pulenu’u and fa’alupega (county chiefs) for their support in getting the census completed  accurately.

A director asked if undocumented immigrants would be counted, as many of them would be reluctant or even refuse to be involved because they are not here legally.

Meleisea said the Census office will do all possible to ensure that everyone residing in American Samoa — legal or illegal — is counted, saying they have procedures in place. He said laws require that everyone be counted, and if necessary, legal action will be taken— as dictated by law — but they don’t want to take that route.