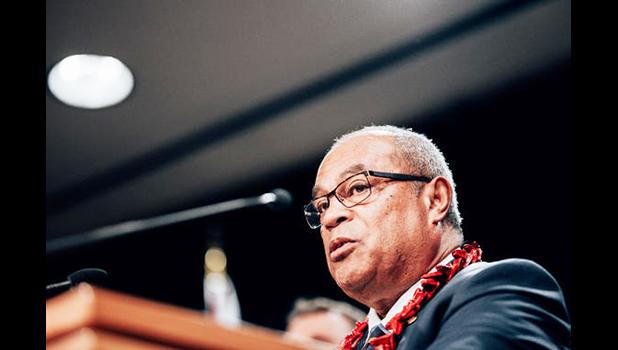 They took inspiration from United States' civil rights movement the Black Panthers, during a period of police brutality against the African American population.

Similar scenes of racial unrest occurred in Aotearoa, and long before the infamous Dawn Raids too. In the early 1870s, an Evening Post article said "Bad as the Chinese are, the South Sea savages are worse, and any extensive importation of them would have a most pernicious effect."

New Zealand faced major economic troubles almost a century on from that report, and Pasifika immigrants brought under the allure of jobs in industrial labour were resorted to as the scapegoat.

"We delivered the West End newspaper around Ponsonby and Herne Bay to get money to pay for the office. The work we did as the Polynesian Panthers was conscientising, it was making people aware of who we were."

Musician Tigilau Ness recalls that they were criticised for "hating white people".

"We had to put up with that kind of stigma as well, not only from the Europeans, the white people, but from our own people. 'Why you do this to the Palagi? Why you go fight the Police?'," he said.

The Panthers insisted on peaceful strike and protest action, as opposed to their US counterparts.

They drove in supporters' vehicles and "dawn raided" the homes of politicians by shining torches and yelling through loudspeakers, to prove why their work was necessary.

Legal rights pamphlets were distributed, homework centres were held in church halls and food co-ops were run. They also provided free transportation for the families of prison inmates who wanted to visit them, and on release free accommodation would be offered.

Fifty years on, the Panthers have concluded a tour of schools and Pasifika communities in Wellington, intending the share the story of the 'Claw' to the next generation.

The Polynesian Panther Party will hold a three-day fonotaga commemoration event this weekend at The University of Auckland's Fale Pasifika.

"The memories are etched in my memory of my father being helpless.

"I don't think there is any Pacific family who was not impacted by the events of the Dawn Raids, and there is a strong moral imperative to acknowledge those past actions were wrong. Through an apology, they recognise those actions were unacceptable under the universal declaration of human rights, and are absolutely intolerable within today's human rights protections.

"Come for the ceremony," Aupito said, welcoming the Panthers to the Government apology.

Ardern added "[the Panthers] will probably remind us to 'educate to liberate'."

The Prime Minister will make her formal government apology for the Dawn Raids on 26 June at the Auckland Town Hall, fifty years on from the start of the revolution against racial injustices against Pasifika in Aotearoa.

The Panthers' golden jubilee couldn't be more forthcoming, given an announcement made this week of a formal government apology for the 1970s Dawn Raids.

Prime Minister Jacinda Ardern said the time had come for an apology for a Labour Party immigration policy that targeted Pasifika who had overstayed their visas by mere fact of their ethnicity.

"To this day Pacific communities face prejudices and stereotypes… an apology can never reduce what happened, or undo the decades of disadvantage experienced as a result, but it can contribute to healing for Pacific peoples," she said.

Ardern was joined at the theatrette lectern by Minister of Pacific Peoples, Aupito Toeolesulusulu Tofae Su'a William Sio, who wiped away tears while sharing his own personal story of being raided as a teenager.

"I'm quite emotional… I'm trying to control my emotions today," he said.

His parents had only just bought a home, taken as an achievement for the family, when a year or two later they'd been woken up to a police officer flashing a torch in their eyes.

"To have somebody knocking at the door in the early hours of the morning with a flashlight in your face, disrespecting the owner of the home, with an Alsatian dog frothing at the mouth," Aupito recounted.

* Written with material from the RNZ/ Tikilounge Untold Pacific History documentary: 'Waking Up to the Dawn Raids'.