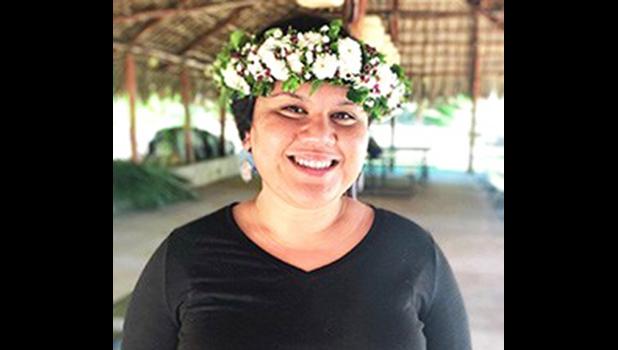 Honolulu, HAWAII — UH West Oʻahu alumna Janelle Saole remembers thinking she might be a guinea pig, but still enrolling in a barely established program called Creative Media. It was 2014 and the program held promise, but was so new that it lacked a track record.

“Really, there was no credibility to how great of a program it was going to be,” said Saole, a composer, music producer, and musician. “I took the risk. I took a leap of faith.”

But the decision paid off well for Saole, who was able to add an array of knowledge and capabilities to her already rich musical skills before graduating in December 2017. Her journey was helped by her faith and an unyielding desire to learn. It also included setbacks, including her mother’s passing away during her final semester of school.

The expertise and relationships gained at the Academy for Creative Media-West Oʻahu helped her secure a position as Mission Memorial Auditorium Manager and Art Exhibit Coordinator for the City and County of Honolulu. She is the first woman of Samoan ancestry to hold the post.

“Had I not been plugged in to the different outlets of the Creative Media Program such learning sound design and graphic design – all the tools I use today in my current career – I would not be able to succeed in my current position,” said Saole, who scored film trailers and worked on the Hawaiian language version of Walt Disney Animation Studios’ Moana while at West Oʻahu.

Saole arrived at UH West Oʻahu just as the Creative Media program was getting underway. It has since grown to become one of the campus’ fastest growing programs and has transfer agreements with the UH System’s seven community colleges, allowing creative media graduates from the two-year campuses to complete a four-year degree. In January, ground was broken for a $33.3 million Academy for Creative Media building on campus.

Saole, 24, was born in American Samoa, and grew up in Kalihi in the Mayor Wright Homes with her parents, four brothers, and a sister. She had musical talent and an ability in composing and recording, so after graduating from Sacred Hearts Academy she set her sights on a music degree from the University of Hawaiʻi at Mānoa. But Saole had not researched her choice well enough and found that Mānoa, while having an esteemed music program, wasn’t her cup of tea.

“The craziest thing is I planned it very well up until that point,” Saole said. Her review of educational alternatives came down to two choices: Return to Mānoa, or take a flyer on the new West Oʻahu program, which had a soft opening of sorts in 2013 and stepped up in Fall 2014 with a Bachelor of Arts in Humanities with a concentration in Creative Media. But Saole decided to take a chance and the almost life-long Kalihi resident packed her bags and moved in with a brother who lived in Kapolei. She arrived on campus not knowing anyone and worked to rectify that by volunteering for various campus activities.

In this respect, Saole displayed the hallmarks of certain students who excel at UH West Oʻahu. They make the most of their college experience by doing well in the classroom and taking advantage of opportunities to acquire knowledge, gain experience, and meet faculty and fellow students.

Saole joined the Samoan Club and served on the Samoan Club Council, sat on the planning committee for the campus’ West Fest, and was involved in PIKO grant events, especially if music was involved. Her efforts were rewarded when she was recommended as sound manager for PIKO Project events. Associate Professor of Music Jon Magnussen discovered she produced and did her own music and encouraged her to take part in the production of a trailer shown before movies at the Regal Cinemas Kapolei Commons 12. Saole said composed and played ʻukelele for the trailer’s intro and outro. She composed the music for another 90-second short, “A Love Letter from the Ocean,” produced by Creative Media students for the theaters and helped blend in sounds and a voice-over for the production.

“Janelle was one of those students who took the experiences and opportunities provided by the Creative Media program and made the most of it,” wrote Sharla Hanaoka, director of UH West Oʻahu’s Academy for Creative Media, in an email. “She rose to challenges both in life and in school and never backed down. We cannot be more proud of her.”

There’s been setbacks to be sure, none bigger than her beloved mother passing away just as Saole was beginning her final semester. Both of Saole’s parents had a major impact on her life, though in differing ways.  Saole’s father was deeply rooted in Samoan culture and customs and raised their children to never forget those things. On the other hand, Saole saw her mother as the ideal “American” Samoan woman who came to “America” and did not forget how challenging that journey was in itself. Her mother became an immigration officer to help her Samoan people have that same opportunity as she did, of living the American Dream.

Saole’s mother also was an advocate of education and pushed not only her children but also her nieces and nephews to strive for higher education. “She wanted us to aim high in life! And to not give in to the stigmas and stereotypes of the environment we grew up in,” Saole explained

“She almost made it to my graduation. But that’s okay. I promised her I would get there and it was the hardest thing to ever do when your motivation is no longer right in front of you.”

Saole notes that her faith has been a huge motivator and factor in her successes. God had strengthened me to get through those long, cold lonely nights in Queens Hospital, staying up doing work till I seen the sun rise in the window,” Saole explained. “He brought peace to my mind when everything was so chaotic and I had many reasons to give up. I give it up to God because He never gave up on me and made sure I never gave up on myself!”

When the job with the Mayor’s Office of Culture and the Arts opened up, she said she was encouraged to apply by Na Hoku Hanohano Award-winner Aaron Sala, who is an assistant specialist at UH West Oʻahu and who had known Saole when she was a Sacred Hearts student and again when he worked on Moana. Saole didn’t think she was qualified, but applied anyway.