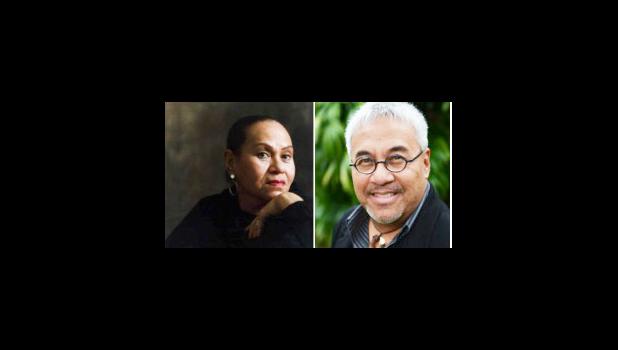 Most people don’t know that American Samoa is THE birthplace of Jazz in the Pacific. It’s because American Samoa is the southernmost border of the US. Jazz is America’s cultural gift to the world and American Samoa has its own unique Jazz history — that links the 2Samoas with America and of course, the music of jazz.

A Tale Of 2Samoas – Our Untold Story Of Jazz

Mavis Chloe Rivers was born in Apia, Western Samoa on May 19, 1929 to Moody Charles Rivers and Louise Stehlin, a Mormon family that was a blend of Samoan, Chinese, British, French, German and Swiss ancestry. Her great-grandfather was known for starting the first Mormon Church in Samoa.

The family had one of Samoa's first jazz/swing bands which was headed by her father Moody Rivers, who played alto saxophone, Olsen Ah Mu and Oliver Ah Mu both played saxophone, her Uncle Percy played the violin and her Aunt Lena Rivers played the piano. There were other family members who played guitar, ukelele and the drums. They named their band the “South Seas Syncopators.”

In 1942, the Rivers family moved to Pago Pago, American Samoa soon after the United States became involved in WWII after the bombing of Pearl Harbor in Hawai'i on Dec. 7, 1941. As a result, their new home became a transit station where thousands of American troops were stationed.

“I've never in my life seen so many soldiers and sailors,” Mavis recalls. “We'd wake up in the morning, look out in the backyard and find it full of tents.” The American troops outnumbered the local population, having a huge cultural influence on the island people.

Mavis and her father's band travelled around the various camps and she was singing three or four shows a week, after school, and the young teen was treated as a virtual mascot by the troops as she became their prime source of musical entertainment.

In fact she earned the name “The Singing Mascot,” by the troops of that era who were often homesick. Mavis also sang on the many US warships that anchored at the Pago Pago harbor with her father's group or with just a guitar player and she would sing requests if she knew the songs.

She became so popular that for some evenings the soldiers and marines brought her to the central telephone station so her voice was heard over the camp intercom lines reserved for official conferences. This way her voice reached many more GIs and marines based in the outlying areas.

So, it is only fitting that her son, Grammy award winner La’auli Matt Moody Catingub will lead a star-studded band of acclaimed jazz musicians from the USA and NZ to celebrate the life and music of his late mother Mavis Rivers.

The annual Samoana Jazz & Arts Festival — 2Samoas is now in its 5th year and has attracted to this years’ festival over 20 international musicians strutting a diverse range of jazz influences and styles — from big band sound, swing, latin, funk, soul, rhythm & blues — and a new exciting space in jazz where Hip Hop meets Jazz.

And for the first time, this year the festival has moved from its traditional weekend to weekend format to same weekend in both Samoas.

“This makes it a better fit for international musicians – they can fly in and cover both Samoa and American Samoa in the same weekend — making it more cost effective and fun for the artists music fans and organizers… we are learning what’s doable, we are strengthening our talent base and capacity for bringing the world to our place — while at the same time positioning the 2Samoas and especially American Samoa as the Jazz destination of the Pacific.

"And we couldn’t have come this far without the sheer dedication and commitment of the people to make this happen every year," says Festival Director Peta Si’ulepa.

The festival runs for 3 days in American Samoa:

International acts include Isaiah Brunt – Blues musician (Australia) & The BB Kings (Am Samoa); Taupou Samoa – A 2O-strong dance performance group – Edwina Thorne with local favorites (Early bird $25 tickets/ $30 at the door — only tickets are being sold for this event)

With Lea Love (US); Isaiah Brunt & The BB Kings and our local favorite musicians. (A nominal entrance fee will be charged, to go directly to the ASJAF to cover expenses — it’s a no host bar.)