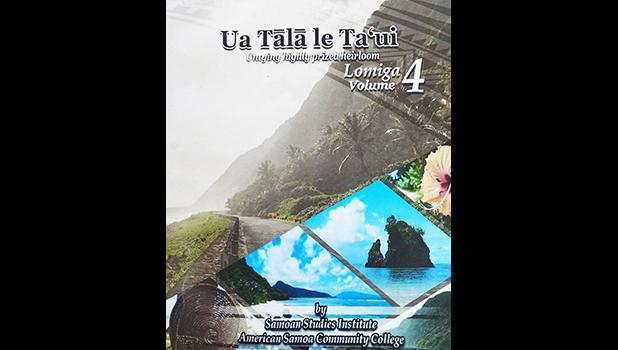 Pago Pago, AMERICAN SAMOA — The Samoan Studies Institute (SSI) at the American Samoa Community College (ASCC) hosted a book launch ceremony on Thursday, May 6th, to celebrate the publication of a new book produced in collaboration with the community.

Gov. Lemanu Peleti Mauga, was the keynote speaker at the event, which was attended by members of the ASCC administration, faculty and students, as well as a number of guests from the public and private sector.

The new book “Ua Tālā le Ta’ui 4,” is a bilingual book of 15 indigenous narratives/folklore stories from selected villages of Manu’a. The book also offers explanations of literary terms, old adages as well as new proverbial sayings at the end of each narrative.

Fauolo acknowledged with great gratitude the role the storytellers or the gatekeepers from the community play in preserving and transmitting knowledge.

“Some of those stories were particular to their individual families, but they were so gracious and supportive of passing indigenous narratives along, especially so our youth would be aware of why some things were seen the way they are.”

At the book launching leaders from the Manu’a Island who had lent their input to the SSI publications were seated as guests of honor alongside Gov. Lemanu at the front of the college’s Multi-Purpose Center auditorium.

The event included a cultural performance by the Student Association for Faasamoa (SAFF) members, using the traditional sula (praise), which emphasized the high regard the SSI holds for the unconditional sharing of knowledge.

Tauiliili rejects the idea that Manu’a stories are not easily disclosed to anyone. He expressed compassion for the youth of Tutuila and Manu’a, and considered that the knowledge and skills he had was all in vain, if he refused to disclose it, and not impart it to the youth of the territory.

Lefiti supported that fact that the stories of Manu’a must be disclosed so that young people of Tutuila and Manu’a understand.

He said Samoa is a place that is known to take its honorifics of meeting places whenever people go. When Samoan kings and paramount chiefs travel back and forth, they take with them the dignity of their village. While so, the travels are very mindful of their hosts rules governing their land and meeting places.

And as the proverbial saying goes, “It wasn’t hidden in the depth” (E le’i natia i fatu alavai) nor “led like fish caught unawares at night (tata’i faai’a o le po).

The words of the experienced fishermen come to mind as “there are always blessings within our midst” (E tutupu matagi i liu o va’a). Lefiti believed that “it is a must to write and record the story of the Sacred Islands of Manu’a”. He expressed his love for the youth of Samoa lest they chase to and fro for the correct version of local stories, when the knowledge is already within its own walls (Ua i fale le matega).

One of the interesting stories in the book is “The connection between Sili of Manu’a and that of Savai’i”. This story was told by Tofa Sualevai Nofoaiga Sualevai, an Orator from the village of Sili.

According to Sualevai, who served in the US Navy and retired from there, it is time to record and write the oral traditions of Manu’a.

Included are drawings and still photos to keep the story alive, and for the readers to visualize the islands of Manu’a. Also there are lists of proverbs and their meanings in the context of use in the story.

According to the Director of the SSI, one of the efforts is to create new proverbial expressions form the story.

“This attempt is to; 1) for students to know the origination of a proverbial expression; 2) assist with thinking traditional and ancient Samoa; and 3) three, learn some proverbs that originated from Falesefulu and Motusa,” the SSI director said.

The heartfelt prayer lest Samoa’s heritage form God is misplaced in the wrongful hands per statement of TuiAtua Tupua Tamasese, as to why the acknowledging call of Tualemoso is declared, for it is the love of the ‘Matua Faasao’ that allowed for some oral traditions of the Motusa to be written.

At the conclusion of the ceremony, Gov. Lemanu and the guests of honor all received a copy of the fourth volume of the “Ua Tala le Taui” produced by the SSI. For interested members of the public, most of the SSI books are available in the ASCC Le Bookstore.