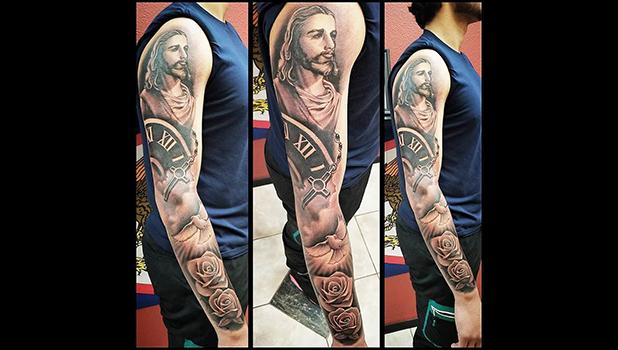 WASHINGTON STATE — The Northwest Tatau Festival 2018 was a huge hit.

For its third year, organizers decided to change the venue from the Tacoma Convention Center to the Puyallup Fairgrounds, and the move was genius!

The kids were able to stay occupied on the inflatable bouncers while the adults were kept busy browsing through the different booths. Vendors were selling Samoan t-shirts, flower headpieces, Polynesian inspired jewelry items, shoes, even ie lavalavas. Food trucks offering island inspired flavors were also there.

Those who stopped by to get inked left with big smiles on their faces as tattoo artists from around the world gathered for two days to show off their stuff. From tribals to portraits and modern contemporary work, all of the finish work was beautiful.

The endless buzzing of the tattoo machines and the 'tap tap tap' of the traditional Samoan 'au made for a memorable event. The sensational sounds of Tenelle and Polynesian superstar Fiji were the perfect way to end the two-day event.

"It is absolutely remarkable," commented a palagi woman who watched as the pe'a was being tattooed. "It's almost spiritual. I can feel his pain. The sound of the wooden sticks when the artist taps them together to form the shapes and lines is mesmerizing. I have never seen anything like this before, and I will never forget it."

A special ceremony to celebrate the 6 women and 2 men who endured the pain and got their malu and pe'a during the event was held in the presence of proud family members and friends. The group was reminded to wear their la'ei Samoa with pride, honor, and humility.

Live entertainment was provided by high school and college Polynesian dance groups from around the state. American Samoa was represented by Le Tausala Samoa. As has been the norm since the Northwest Tatau Fest kicked off in 2016, one of the performing dance groups always gets selected to attend the International Reggae Fest in California. This year, the honor went to Mataala who did a great job representing Samoa with their siva and pese.

A big addition to this year's event was the presence of researchers who were in American Samoa last year to study the link between tattoos and a robust immune system. Dr. Michaella Howells, an Assistant Professor of Anthropology at the University of North Carolina, Wilmington, along with Dr. Christopher D. Lynn, Associate Professor and Director of Evolutionary Studies at the University of Alabama's College of Arts and Sciences (Department of Anthropology) and two interns were able to take spit samples from people getting tattooed as part of their study.

The goal, according to Dr. Howells, is to find out if tattoos help prime a person's immune system against the threat of infectious disease.

As their first major event appearance since exporting their product to the US two months ago, Vailima showed up big time as one of the sponsors. The only local sponsor was Samoa News.

With the success of this year's event, organizers have decided to bring the show to American Samoa for the first time, later this year in November. Details of the planned 3-day event, which will include live tattooing and a concert, will be published in Samoa News at a later date.