The Naked Samoans do magic 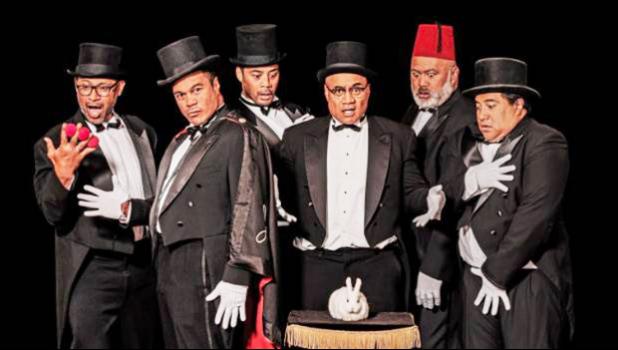 Auckland, NEW ZEALAND — It's been 12 years since the Naked Samoans were all together under their official title, although there's been Bro'Town and two Sione's Wedding films and lots of individual CV points compiled since then by the six of them.

This 75-minute reunion show was a curious, endearing, almost old-fashioned piece - half comic play, half old-school magic show. At times, it felt as good as anything they've done, sharp, clever, properly funny; at times, it felt unfinished, as if they'd run out of writing time to quite add that final polish.

The elaborate backstory began with a comic John Campbell voice-over explaining the dismal failure of the original Naked Samoans show back in 1998 and the mental toll that critical pasting had on the boys: Mario Gaoa and a mute Dave Fane toiling at KFC, Heto Ah Hi living in Myers Park ("freedom camping," he said indignantly), gout-afflicted war veteran Shimpal Lelisi washing car windscreens, Oscar Kightley working for the ministry of Pacific Island Affairs and, extracting the most comic effect, Robbie Magasiva re-invented, "and transitioning to become a palangi" in Wanaka, complete with southern man accent, casual racism and a love of hunting and fishing.

Then they found themselves unwillingly reunited for the first time in two decades in a lawyer's office, learning that they'd been left a rambling Ponsonby villa in the will of a famous magician. The boys duly went to investigate, and became caught in the spell of the house and forced to work together again.

This first section had some brilliant AV effects, some chunks of very clever writing and an incredibly versatile set.

Then the curtain suddenly went down, but this was no interval - instead, the Samoans peered around it, saw the audience, and found themselves in dinner suits, somehow compelled by the magic house to perform a magic show.

There were old the old-style magic tricks you'd expect - the woman cut in half, the string of handkerchiefs, and Fane wearing a sparkly dress; they had all obviously learned their stuff, and while some of it was a bit hokey (and deliberately so), yes, some of it was actually quite sophisticated. And then, suddenly, and a bit surprisingly, it was over.

There were some brilliant lines, many of them delivered by Kightley, who had a recurring gag in his civil servant's role about everything "being an issue that affects our people"; when Ah Hi disappeared, he observed that the others couldn't abandon him because "he's Tokelauan, there's only 8000 of them, and most of them are in Wellington - they'd notice if one went missing".