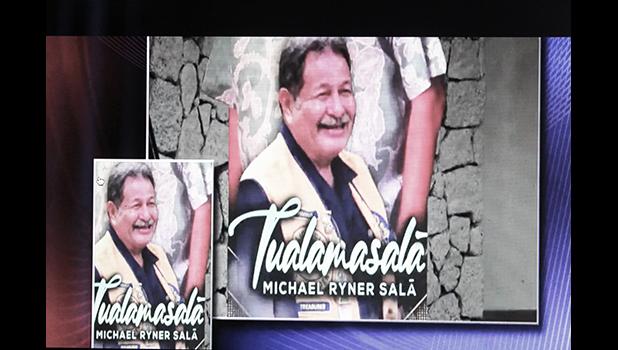 Born on Sept. 29, 1944 in Avaio village in American Samoa, the former director of the local Homeland Security Department (ASDHS), passed away on Jan. 17, 2022 in Portland, Oregon.

At the time of his passing, he was serving as the President of the Pacific Consultants Services, a private agency that offers security, management, investigation, collection, grant application and  international technology assistance, according to the House Concurrent Resolution read during the memorial service and then presented to Tualamasala’s family.

Tualamasala’s “infectious smile and presence will be missed by all who knew and benefitted from him.  His passion and accomplishments for the protection of the American Samoa will be difficult to emulate, but his legacy will live on in his family and all who knew him,” according to the resolution, which details his life of public and community service.

Some members of the Lions Club of Pago Pago pose for a photo, with a large photo on the screen behind them of the late High Chief Tualamasala Michael Ryner Sala as well as a bigger than life poster, at Gov. Rex Lee Auditorium, where Tualamasala’s memorial service was held Monday afternoon. Tualamasala, who passed away on Jan. 17 in Portland, Oregon is a lifetime member and Charter President of the Lion’s Club in American Samoa. This photo was on the Lions Club of Pago Pago’s Facebook page. [photo: Lions Club Facebook]

He retired as the first ASDHS director and is a veteran law enforcement and public safety officer with over 40 years of experience.  He has been recognized locally, within the Pacific Region and by the U.S. federal community for his outstanding and invaluable contribution to enhance law enforcement services and protection of the people of American Samoa.

Tualamasala is survived by his children, Jennifer Rebecca Sala Jones and Matthew Michael Sala, and his grandchildren: Olivia, Malia and Betty Merleann.