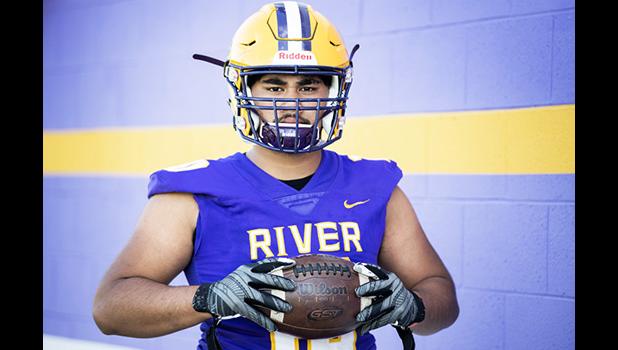 Vancouver, WA — As Tyrehl Vaivao prepared to leave American Samoa for Vancouver at the start of sixth grade, he didn’t want to leave. His home, a small village named Petesa was all he knew. He felt unprepared to move more than 5,000 miles away to an unfamiliar place.

But his father insisted. In Tyrehl, his youngest of seven children, he saw a special ability on the football field. Perhaps one day, through football, he could land a college scholarship.

This summer, after a months-long stay with his parents back in American Samoa, Vaivao did not want to leave.

His father, Francis Semi Vaivao, a pastor in the family’s village, has battled a serious illness for about a year Tyhrel had returned home to be one of his caretakers.

To then fly back to Vancouver after a few short months went against his instinct.

He holds fond memories of life in American Samoa, where everywhere is walkable and he would play sports and hang out with neighboring friends. Deep down, he knew he was returning to a big year in his life.

“I wanted to stay and help … But it was going to be my senior year,” Vaivao said. “I didn’t want to fall back.”

The upcoming months in the classroom and on the football field were set to determine whether the 6-foot-1, 255 pound defensive force, who Columbia River coach Christian Swain believes is a Division-I football talent, would advance him on his long-held dream of playing football as a career.

“That’s a dream for an American Samoan boy,” Francis Vaivao, Tyrehl’s brother, said. “There’s only two ways out of American Samoa, that’s the Army or football.”

Despite being on opposite sides of the world, the family’s bond is strengthened each time Vaivao steps onto the football field.

Before he puts on his uniform, the soft-spoken Tyrehl says a prayer.

“I ask God to provide for me before I go into battle,” he said, and his mind immediately goes back to his village — and to his family.

A 17 hour flight removed from his parents, football brings the family together. On a given Friday night, Tyhrel’s 39-year-old brother Francis Vaivao, who he lives with, streams each game from his phone in the stands on Facebook Live so their parents can watch.

His parents, Francis Semi and Faye Vaivao, cheer him on from American Samoa a U.S. Territory in the South Pacific. Though it’s roughly 5,083 miles away from Vancouver, the island is just four hours behind.

Four generations of Vaivaos have come to the mainland, the majority through military service. Between cousins, uncles, nieces and nephews living in Vancouver, there are “too many to count.”

Enough to make Tyrehl hear them from the stands during football games.

“It helps out my dad. He’s sick. It’s a joy in his heart,” Francis Vaivao said. “When he hears the name ‘Tyrehl Vaivao with the tackle’ over the loud speakers he says, ‘Oh, yeah that’s my son!’ ”

Vaivao lives with Francis, 39. His oldest brother, Brian Vaivao, 42, also lives in Vancouver with his son, Tyrehl’s nephew, Darian ‘Puka’ Vaivao, who is now a 17-year-old senior at River. All in all, Vaivao says he has enough family on the mainland to make it feel like a home away from home.

All of them attend Heart of Worship in Vancouver, the same church Tyrehl’s father, Francis Semi, started in their home village. A sickly Francis Semi is leading a rebuild of the church, which was destroyed in February by Cyclone Gita. Heart of Worship is a Protestant Christian Pentecostal church.

Through church, they feel a special connection to family back home in American Samoa.

Read more at The Columbian