A boat for Toa ole Vasa 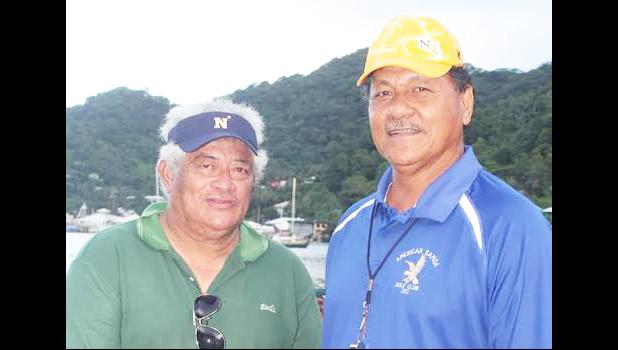 The fautasi regatta that took place over a period of three days last week had four boats built by one local man — Leotiti Maselino Ioane. The regatta comprised the two Heats, the Exhibition Race and the final 2017 Flag Day Championship Race, and his boats all placed.

Add another fautasi to his resume by next year: Principal of Fagaitua High School, Suaese “Pooch” Taase told his team Toa o le Vasa, who rowed the Sinapioa in the exhibition-scrimmage race last Thursday, during his speech, that by next year there will be a boat for the Fagaitua Alumnis built by none other than Leotiti Maselino Ioane.

Known by many in the fautasi community as “Maselino”, he told Samoa News how much he looks forward to making the boat for Toa ole Vasa.

He also said he has had other requests from other villages to make boats, which could mean that the sport of Le faigamea i le tai is set to expand even more.

Maselino said, “This is a talent (building fautasi) that not many know on our island, and it is so useful because it has blessed me a lot. If you are interested in learning, let me know I love those who want to learn and are willing to learn.”

He added how thankful he is for these fautasi villages that asked him to make their boats, because it has made him believe in his own work and talent of boat building.

“Last week, when I saw those boats place, I felt honored to have built them. I wouldn’t have done it without their faith and confidence in me because of their 100% commitment in training, great leaderships of their captains, trainers, committees and taking good care of their fautasi boats.”

According to Maselino, each of these boats has lasted for 3 to 5 years.

He has built many other boats in Samoa also, before coming over to build these, and the boats in Samoa are still in great shape. He said not only does he build boats but he also trains the rowers, captains and those who are interested in learning how to steer.

In an interview with Maselino, he said he studied boat building in Apia when engineers from Norway opened a program to teach anyone in Apia about how to become a boat builder in the mid 1970s.

Maselino, who was 39 at the time, had a passion for learning, decided to take on this program of boat building for 5 years. Boat builders make and repair sailing, fishing, pleasure and motorboats. They also design vessels and assist naval architects with the design of vessels. The result was it became something he wanted to do for a living.

When Maselino was done with his studies, his specific goal was to make fautasi boats, and that goal was achieved many times. He started off by making boats in Samoa and then later came to Tutuila, which is where he made his first boat on island — the first Paepaeulupo’o.

“When I studied boat building, it was a course that opens to making lots of different kinds of boat, but my main focus was to make fautasi boats. That is something I enjoyed and I know our country enjoyed too,” Maselino said.

A fautasi is a long boat, designed to be rowed by a large number of oarsmen. They originally were a means of transportation among the islands; they could go very fast and carry people and cargo significant distances across the open ocean.

Nowadays fautasi are purely racing boats – long, narrow (the rowers sit two abreast) and amazingly fly across the water, powered by not only rowers pulling in unison, but also because of the materials and design of the fautasi, with of course a skipper’s know-how.

Maselino, who is now 60 years old, told Samoa News in making a fautasi boat, it usually takes him about 3 months to work on it, and he has three major points when making a boat — to make sure it’s great in steering and rowing in both rough and calm waters.

“I like to keep the same technique that was taught to me more than 20 years ago; men back then made the boat heavy and found it to be much faster and stronger on the water. Nowadays new materials have been introduced — like for the high tech boats,” he said.

Both the Fuao and Paepaeulupo’o are considered the latest in high tech boats, due to the use of new materials. For example, the use of a fiberglass body is said to make the boat lighter, allowing for greater speed. However, there is a debate as to whether or not this makes fautasi unsafe in rough waters, causing it more likely to capsize than the heavier wooden ones.