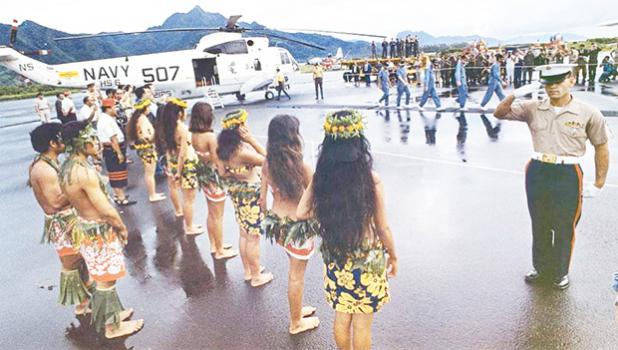 Washington, D.C. – February is the 50th anniversary of the Apollo 14 mission, in February of 1971. It was one of several Apollo missions in which the astronauts splashed down near American Samoa and were first welcomed back on land in American Samoa. In commemoration, Congresswoman Uifaatali Amata placed a permanent Statement in the Congressional Record.

“We’re proud of American Samoa’s part in the remarkable history of the U.S. Space Program during these famous years of rapid advancement and the courageous Apollo missions,” said Amata. “The astronauts of Apollo 14 landed on the moon, and when they returned to earth the next place they stepped was American Samoa, and they were warmly welcomed and cheered as heroes here.”

Following the heroic survival of the Apollo 13 mission, three astronauts in the Apollo 14 mission successfully returned and landed on the moon in 1971. It was the third to land on the moon, and the first to land in the Lunar Highlands, with Cone Crater as a nearby landmark. The crew was Commander Alan Shepard, Command Module Pilot Stuart Roosa, and Lunar Module Pilot Edgar Mitchell.

While there, Commander Shepard hit two golf balls on the surface of the moon. This mission brought back numerous moon rock samples totaling over 94 pounds for study and display. At the suggestion of the Forest Service chief at the time, Roona also took a packet of about 500 seeds of five tree species with him, that orbited the moon. Upon return, many were planted for ceremonial purposes, and are termed “moon trees,” including one in Philadelphia planted in commemoration of the nation’s Bicentennial.

Completing a nine-day mission, the astronauts in the command module Kitty Hawk splashed down in the South Pacific Ocean on February 9, 1971, about 900 miles south of American Samoa. The crew was recovered by the USS New Orleans, then flown by helicopter to Pago Pago International Airport in Tafuna and welcomed in celebration here. From Tutuila they boarded a plane to Honolulu, then to Ellington Air Force Base near Houston, Texas.

The National Aeronautics and Space Administration (NASA) was established by President Eisenhower. The soaring goal of reaching the moon was famously declared publicly by President John F. Kennedy. The Apollo moon landings then occurred during President Nixon’s administration.

NASA, with budgets set by Congress, has stated an objective to return to the moon, and beginning development in pursuit of an eventual goal of going to Mars.

For the NASA history 50 years ago, read more here.