“Product of the Rock” 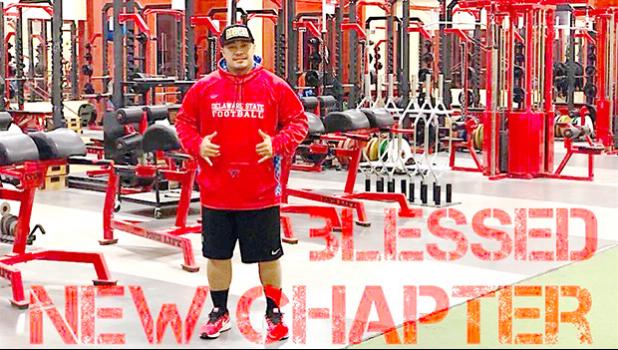 Now a coach in Division 1 football
By
Blue Chen-Fruean
blue@samoanews.com

Pago Pago AMERICAN SAMOA — After years of being an athlete, coach, mentor, motivator, and inspiration, Keikiokalani "Keiki" Misipeka is heading to the east coast to continue his football coaching career at Delaware State University, his first Division I coaching job.

"I am motivated," said Keiki via a Facebook post announcing his new position. "First and foremost, I want to thank the Man above for blessing me. I'm humbled and grateful for my next journey."

It was last month that Keiki received a phone call from Delaware State University's head football coach Rod Milstead, during which the two men spoke about philosophy in coaching, the running back position, and expectations.

Coach Milstead offered Keiki a job as the running back coach and recruiting coordinator and without hesitation, Keiki accepted.

With his decision, Samoa News understands Keiki is the first person to have graduated from the American Samoa high school system to coach AYFS youth and high school football, then relocate to the mainland and become a junior college and Division I football coach.

"I want to thank Coach Milstead for giving me the opportunity," Keiki said. It's a long way from home. I hope my journey will inspire the youth of American Samoa."

"I grew up playing on the same lava rocks you are practicing on today," Keiki shared. "I carry my battle scars proudly."

His message to the local youth: "Remember your roots, and continue to work hard. Anything is possible."

Keiki graduated from Samoana High School in 1998 and afterwards, he attended Snow Community College and played football at both the University of Hawai’i and Southeast Missouri State University.

He then played professional football for the Edmonton Eskimos in the Canadian Football League and after his football career ended, Keiki returned to the territory in 2005, during which time legendary Manu Samoa head coach Laauli Michael Jones was holding rugby trials for the Manu Samoa team.

Keiki tried out for the Manu Samoa, but unfortunately, he was not selected to be part of the team.

But Laauli offered him opportunity to be part of the new IRB High Performance Training Center in Samoa and Keiki accepted. After a year of training, Keiki was selected to be part of the IRB Savaii Samoa A team, which would go on to win the IRB Pacific Cup in 2006.

His accomplishments didn't stop there though.

Keiki was also selected to be part of the Manu Samoa 7s team, where he played with the likes of Uale Mai, Apelu Faiauga, Mikaele Pesamino, Lolo Lui, Simailka Simaika, and Alafoti Faosiliva. He became the first athlete from American Samoa to be selected to the High Performance Unit and play for Manu Samoa.

After his short career there, Keiki invested all of his time into the youth of American Samoa, volunteering to coach rugby for his village of Fagatogo, the AYFS football league, and his alma mater, Samoana High School. He was also the Player Development Officer for Fieldhouse 100, a non-profit organization that helped local student athletes with scholarship opportunities to attend college through sports and receive a free education.

But although he loved what he was doing in American Samoa, Keiki and his wife Tufi Malauuli wanted to give their kids access to opportunities they never had. And that's why they decided to move to Hawai’i, where Keiki coached at Farrington High School for two years while his kids participated in youth sports.

Not long after that, the Misipeka family relocated again — this time, to Las Vegas, where Keiki coached at Silverado High School under NFL legend Randall Cunningham.

Although he was gone from the Rock, Keiki continued to help the local youth, who were always on his mind.

As part of the non-profit Pasefika International Sports Alliance, he coordinated with PISA academic advisor Rachel Jennings — who was based in American Samoa — the Faa Amerika tour, through which student athletes from American Samoa, Hawai’i, and Las Vegas were able to take part in summer camps and visit universities across the country.

"This was a great experience and opportunity for the kids," Keiki told Samoa News earlier this week. "We shared with the athletes that being on the Faa Amerika tour was something bigger than themselves. They represented all of the athletes from back home who couldn’t make the trip, in how they carried themselves, and how they competed and showcased their talent."

He continued, "If they did well during the camps, college coaches would fly home to visit them and also evaluate their brothers and sisters who didn’t make the trip."

In 2016, Keiki received his first college coaching opportunity from head coach Jeff Sims at Garden City Community College in Garden City, Kansas. There, Keiki served as the running back coach and international recruiter. And in just two years, he made his presence known, winning a NJCAA 2016 championship, two conference championships, and two bowl game appearances.

Additionally, he recruited over 20 Polynesian athletes from American Samoa, Hawai’i, Australia and parts of the US, including others from Canada, Great Britain, and the Netherlands.

Keiki knows he is blessed and he's truly grateful for the opportunities he's been given.

“Good luck to all the coaches back on the Rock," Keiki said. "Not too long ago, we were standing side by side, coaching and preaching to the youth. We were selfless warriors investing and pouring our hearts out for tomorrow’s future. A big fa’amalo and thank you for your service.”

No matter how far away he is from home, American Samoa is always on Keiki’s mind. He knows he wouldn’t be the person he is today without his parents, aiga, the Fa’aSamoa, and growing up on the Rock.

His hope is to return home someday to share the knowledge he has gained with the next generation of youth in the territory.

“Lastly, I want to thank my wife, kids, and mom for always supporting me. I wouldn’t be in the position I am today without your support. Fa’afetai tele lava everyone, alofa atu, and as always, Samoa Muamua Le Atua,” Keiki told Samoa News.