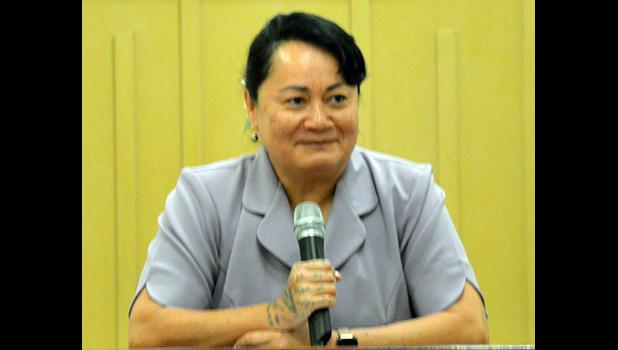 People with pets and a few late passengers were the only glitches
By
Fili Sagapolutele
fili@samoanews.com

King-Young said the Jan. 13th charter had 275 passengers including lap children but she didn’t immediately have a break-down on hand — when contacted by Samoa News for comments yesterday morning — on the individual number of patients and escorts, local college bound students and returning passengers who reside in the US.

Asked if there were any problems encountered by the agency for this charter, as there were several issues with previous charters, King-Young responded that, “it went very well.”

“We did not encounter any problems this time except for... we had about 6 people come late to the security check, and one last passenger nearly missed the flight,” she explained.

Additionally, “We had issues with passengers traveling with pets so we will likely not accept passengers with pets on future flights,” she said, noting that there was no delay in fight departure out of Pago Pago for this charter. “In fact the flight left earlier than originally scheduled.”

The three previous charters last year faced late departure due to several issues with passengers at the airport including many wheelchair passengers. There were also some passengers who didn’t wearing their face masks on the plane, as required by the airline for boarding and departure of aircraft.

Medicaid Office had issued a reminder in advance of passengers checking in at the airport on Jan. 13th to “bring your masks and wear your masks upon boarding HAL#922. Failure to WEAR your mask will delay the flight as HAL cannot depart until all passengers are WEARING their masks.”

King-Young confirmed that the Hawaii state government had granted American Samoa’s request for a “quarantine exemption” waiver for all passengers entering Hawaii from a COVID-19 free US jurisdiction.

However, “federal laws have changed again and that may not be available in the future,” she said. “We will continue to work with the State of Hawaii to confirm these new regulations.”

Asked about the next medical charter, she confirmed that there will be a return flight on the Jan. 29 repatriation flight from Honolulu but the cost share has not been confirmed yet.”

The Medicaid director thanked all its partners and government agencies for their cooperation and support for the medical charter.

As previously reported by Samoa News, the cost-share for non-medical patients/escorts was around $920 for the Jan. 13th medical charter.