If DHSS didn’t call you to come in – stay home 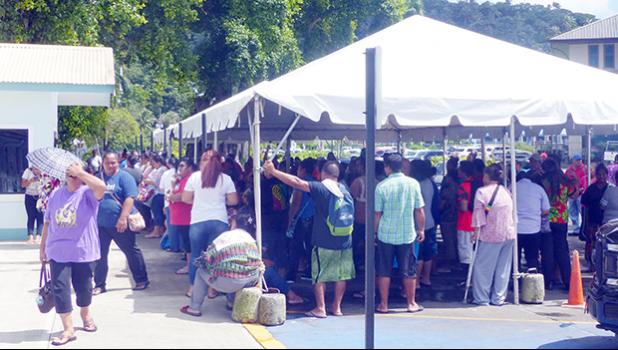 Police officers are present to ensure that there are no more ‘mass gatherings’
By
Samoa News staff
reporters@samoanews.com

Pago Pago, AMERICAN SAMOA — Local residents who applied for the Additional Supplemental Disaster Recovery Assistance (ASDRFA) Program administered by the Dept. of Human and Social Services (DHSS) continue to show up at the DHSS compound – even though they haven’t been contacted to do so – and therefore, the Dept. of Public Safety has had to step in and block off the parking lot area in order to comply with the emergency declaration regarding mass gatherings.

Last week, despite numerous announcements by DHSS director Mauvaefaatasi John Suisala and staff members – that nobody is to show up unless they are contacted by DHSS – hundreds of people started lining up in the DHSS parking lot before sunrise. Some of them were contacted to come in to take photos for their IDs and pick up their vouchers. The majority however, just showed up, saying, “Well, since my neighbor and my other family members got their food stamps, I should get mine too,” Muavaefaatasi told Samoa News.

“Eighty percent of the people who are here were not contacted by us and should not even be here,” the DHSS director continued. “They include people who have been denied, those whose applications are still pending, and those who simply refuse to leave unless they get the answers they want.”

On the day in question, Muavaefaatasi said he could see the commotion from his office across the street at the Centennial Building. He said he was contacted by the Governor’s Office about the “mass gathering” of people “which included young children” in the DHSS parking lot.

The DHSS director walked over, and met up with police officers who were able to disperse the crowd, by closing down the Food Stamp office that day. This took place before lunchtime.

Following a meeting, the decision was made to seal off the parking lot area and allow only a certain number of people under the tent and in the DHSS office building, at one given time. Once they are served, the next group of people would be let in.

Muavaefaatasi said if people would just stay home and wait to be called, there would be no problems. But the fact is, they simply refuse to listen. DHSS employees have been verbally attacked and ridiculed by irate local residents who blame them for the 'delay' and claim the workers are 'holding back' from giving them their benefits.

The ASDRFA program infuses $1.4 million per month into the local economy. Since vouchers were distributed – late last year – stores have been running low on supplies as program recipients now have buying power to purchase items in bulk.

By December 2018, DHSS received close to 8,000 applications for the ASDRFA and it takes about an hour to review and complete a single application – longer if it is incomplete. The money from this program, combined with the usual monthly food stamp issuance, amounts to $2.4 million per month in ‘purchase power’ according to Muavaefaatasi.

The program issues vouchers for people going back to last year. For example, if a person was contacted last week to come in, they would have been issued their April vouchers and then given a date (usually a couple of days later) to come in and pick up their vouchers for the previous 5 months (November-March). Because the assistance has a set amount per person, big families (8-10 people) have received between $3,000-$4,000 for the 5 past months.

Federal law provides $18 million to American Samoa for disaster nutrition assistance - through the ASDRFA Program — and the funding remains available for obligation by the territory until Sept. 30, 2020.