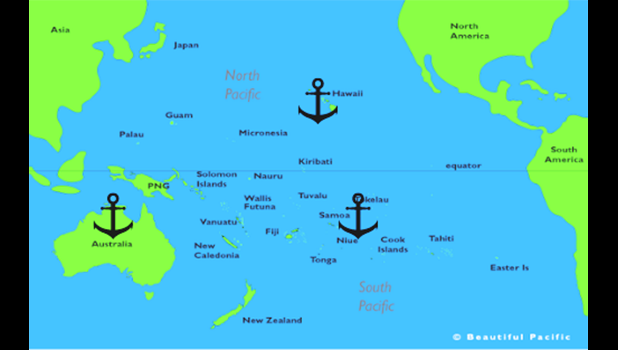 Washington, D.C. — In a letter to Senator Zed Seselja, Australia’s Minister for International Development and the Pacific, following a recent video conference call with members of the Congressional Pacific Islands Caucus, Congresswoman Uifa'atali Amata called American Samoa one of the three anchors of the new AUKUS Indo-Pacific security pact pledging the three signatories, Australia, the United Kingdom and the U.S, to a joint effort to check Chinese expansion into the Pacific region.

The consultation took place shortly before Australian Prime Minister Scott Morrison arrived in Washington separately for a late September summit of the Quad (Australia, U.S., India and Japan) grouping, a separate alignment with many of the same goals.

"My priority in Congress is to secure funding for a new, state-of-the-art hospital that can make maximum use of internet and other modern communications technology to provide quality health care through telemedicine not only to our people but to our part of the region," explained Uifa'atali, "reducing the need for long travel to such metropolitan centers as Auckland, Sydney and Honolulu for specialized treatment that could be provided in American Samoa."

She said the territorial government says it will set aside a major portion of the $479 million, potentially upwards of $300 million, in recently granted stimulus funds from the federal government toward such a facility, but that additional authorization legislation from Congress will be required to enable American Samoa, and other territories or states to use those funds for critical healthcare infrastructure.

A new facility would be on the western side of Tutuila convenient to the airport, whose main runway already has the capacity to handle the largest aircraft flying anywhere in the world today. The VA alone spends millions of dollars each year just to fly military retirees to Honolulu for checkups and treatment because the department has judged American Samoa's only hospital below minimum VA standards for treatment of veterans.

In a GAO study mandated by Congress three years ago, the watchdog agency gave American Samoa's half-century-old Lyndon B. Johnson Tropical Medical Center a failing grade. The study said the project could reach $900 million and take up to 10 years to complete depending on decisions in scope. Congresswoman Amata has been successful in having $2.5 million for initial planning and design work added to this year's Interior budget, which is still pending in Congress but likely to pass at the end of the year.

Finally, there is also pending proposed legislation passed out of the House Energy and Commerce Committee as part of the $3.5 trillion proposed stimulus plan that could grant American Samoa up to $150 million over 10 years towards development of the hospital. This funding is dependent upon final passage of new stimulus funds and subject to modifications or reductions in negotiation of the overall package. Additional funding will be pursued from other agencies as well, including the Department of Interior, Department of Veterans’ Affairs, and Department of Defense.

Applauding Hawaii Congressman Ed Case's leadership in the bipartisan Pacific caucus, Uifa'atali commended the Minister for the briefing and urged regular communication with American Samoa Governor Lemanu Peleti Mauga in the future on Australia's activities in the region.

“People familiar with World War II history think of places like Pearl Harbor, Guadalcanal, Tarawa, Peleliu and Tinian but are less aware that while American Samoa thankfully was not a front-line battleground,” noted the four-term congresswoman, “the territory served as a vital staging area for the U.S. armed services in the Pacific theater.”

The military also recruited many Samoans for service in the war effort, including her own father, the late Governor Peter Tali Coleman, who served in Solomon Islands and after the war was inducted into the U.S. Army Infantry Hall of Fame at Fort Benning, Georgia.

“We are proud to be able once again to serve our country's security needs in the challenging period that lies ahead and believe our new hospital would be a critical component of regional security and a tangible demonstration of American soft power. Just as Hawaii is the northern anchor of AUKUS, American Samoa is proud to be the southern anchor along with Australia,” Uifa'atali  concluded.