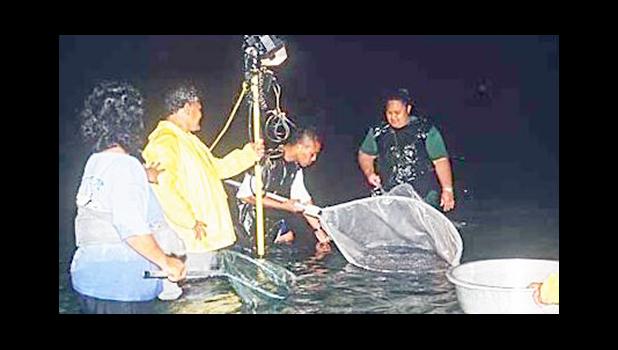 Pago Pago, AMERICAN SAMOA — The recent wet weather conditions can only be attributed to one thing: PALOLO!

At least that’s what most locals are saying when trying to make explain the gusty winds, high surf, and unpredictable rainfall.

Palolo spawning is predicted to occur in territorial waters usually on the 7th night following the 3rd quarter full moon in October and November. And if there is a palolo rise this year, it will occur on or about Oct. 19th and 20th, since a full moon is expected Oct. 13th.

Samoa News contacted the Department of Marine and Wildlife Resources (DMWR) yesterday afternoon and was told that DMWR crews will be out and about, checking for palolo starting Oct. 19th until Oct. 21st. Locals are hopeful that the slimy delicacy with rise this year, as there was a weak showing last year - only a minimal amount found near the Manu’a Islands.

Samoans have long believed that palolo rises when the smell of moso'oi is in the air accompanied by wet weather conditions. Some say a strong smell of the reef, and brown foamy scum (from coral spawn) on the ocean surface are also indicators of a palolo rise.

Locals are already getting geared up - preparing their homemade nets, flashlights, and buckets for when the news breaks, that the palolo has arrived.

In past years, it has been common practice for avid palolo hunters to camp out near the shoreline to await the arrival of the worm that lives in shallow coral reefs throughout the South Central Pacific region. Local fishermen with small ‘alia boats go out for miles, sometimes returning with big hauls that are then packaged (in fist-sized portions) and sold on the roadside for about $25-$30 each.

Some people eat palolo raw, as it is being scooped out of the ocean. Some prefer to eat it fried with onions or eggs, or sautéed with butter and spread on a piece of toast like caviar.

According to seapics.com, palolo worms inhabit tropical and temperate ocean waters worldwide. It is the worm’s ‘unique spawning’ behavior in the South Pacific that has drawn attention, during which ‘the rear end of the worm breaks off and undulates to the surface, releasing eggs and sperm in a milky, gelatinous soup.”

There are over 14 species of the palolo worm and in the Samoa region, if there is a spawning, palolo generally will rise for up to three nights - only for a few hours starting a little after midnight - in October and/or November.