“A friend is gone:” Handpicking hardy corals to save them from warming 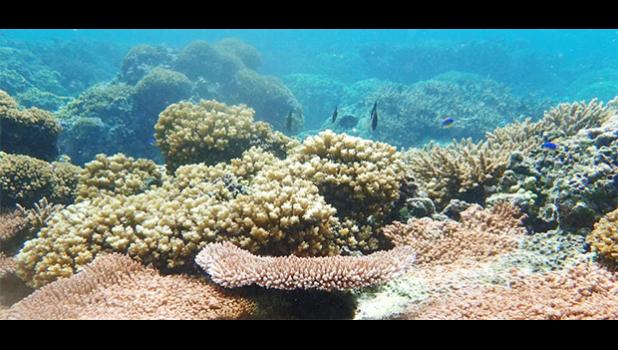 Source: Environmental Health News
As warming waters and acidification threaten corals around the world, scientists are gathering clues to save the charismatic colonies and bolster biodiversity

Pago Pago, AMERICAN SAMOA — When Steve Palumbi and a group of scientists arrived in American Samoa in 2017, they saw a grim scene. Acropora hyacinthus, a charismatic coral shaped like large plates, was dying out.

Some of the researchers had known the dying corals on an individual basis for years. Palumbi first visited American Samoa in 2008, after learning about a lagoon with particularly warm waters. Despite balmy temperatures reaching up to 95 degrees Fahrenheit, the lagoon harbored a thriving coral reef. Palumbi, a marine biologist at Stanford University, wanted to check it out.

The trip began a decade-long project to study the coral reef in the lagoon, which is located off the island of Ofu. The Palumbi lab monitored and mapped the corals.

"We followed a hundred corals every month for the last 10 years," Palumbi told EHN. "We could sit around in our lab in California and talk about individual corals."

But in 2015 and again in 2016, El Niño heated up oceans far and wide—the phenomenon spanned from South America to the middle of the South Pacific Ocean, where the smattering of islands and atolls that make up American Samoa are located. Warm temperatures wreak havoc on corals—and can eventually destroy entire reefs.

Time series for a coral in Samoa bleaching then recovering. (Credit: Megan Morikawa)

While Acropora hyacinthus recovered from El Niño in 2015, a second episode proved too much. This time, 85 percent of the colonies had been wiped out.

"One of my favorite corals, AH-93, grew up to be about a meter across and then died," Palumbi said. "I have this very sad picture of AH-93, totally stark white dead. It's like, wow, a friend is gone."

But in the wake of this disturbance, Palumbi and a group of scientists are learning valuable details about how coral reefs cope with rising temperatures from natural events like El Niño, which are predicted to intensify with global climate change. Recent work from the lagoon shows that corals—across species and among individuals within a species—can react to heated waters very differently. As reefs deteriorate across the world, biologists hope to find reliable ways to handpick hardy individuals to replant in destroyed reefs, which could help brace corals for climate change.