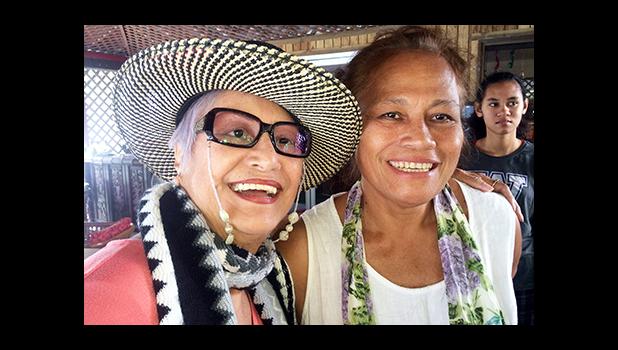 Evalani's has always been a special place for me. I have always been able to get my taco & enchilada fix for my Southern California Mexican Food addiction. Hawaiian Airlines flight crews used to join me for Karaoke Nights… remember the Hawaiian classic "He Aloha Mele?"  And of course, if not getting my heart broken at the airport restaurant in the early 80s... a pretty girl would always dump me at a comfy red Evalani's booth — such sweet memories (lol).

Evalani's has stepped up their game with superior tacos, enchiladas, and my new favorite Crab Enchiladas! We need to check with their accountant how they do these big tacos for a tala is unbelievable.

Look for Thursday's $1 taco nite. Saturday night you can enjoy a live band and 5 tacos for $5 (your only special taco deal outside of Taco Nite).

So we should all thank Evalani... but her staff is dedicated and committed. Tafa and her husband Ropati Maiava are overseeing the staff and kitchen. Ropati sneaks away from the kitchen to star as the DJ. The waitresses are all fun characters with their own special stories, which you might learn about after ordering a few beers early before they get too busy.

Far in the background is cool Uncle Leaga, and a niece, Tara... making this a long standing family business that commands our support and patronage.

Evalani joined another Samoan aviation legend this week. Mae Sapolu has served Polynesian Airlines, Pan Am, and United Airlines... and has been there for some of the most historic moments in Pacific aviation history.

We could write a book on Mae's experiences... but Cool Stuff will instead highlight her current achievements.

In the direct shadow of Apia Park, across from the tennis courts, is Mae's Hidden Garden.

The garden is steeped in natural beauty, significant Samoan history and mystery.

It is a fact that her ancestor Alexander Brown left Scotland, transited through Manu, and established himself in Fagaloa Bay and Upolu. It also appears to be logged in oral history that Brown was in Manu’a and purportedly received a significant title.

This is where Cool Stuff backs off and calls upon Manu’a's traditional leaders to verify reality. Tufele F. Lia was my dear fa'aaiga uncle I loved dearly. We chatted over Koko Samoa for hours about his Grandfather, who died with his Tuimanua title... preventing its continuation under colonial rule.

Mae's ancestor was always known in Upolu as Tuimanua Alesana Brown. He claimed to have been bestowed the title in Manu’a.

Visiting the Hidden Garden (where Brown is now buried) and Mae in Fatoia should be important to traditional Samoans, Manuans, and historians.

Was the Tuimanua title actually bestowed on Alesana Brown?  Was it a real Sao Fa'i or an old school joke on an overly generous transiting Palagi?

This matter is of extreme sensitivity as land and titles are interconnected and family pride is always on the line.

Compounding this Tuimanua Alesana Brown lore is another legend of Alesana being the Scottish Brown of Queen Victoria's affection.

In association with a University of Hawaii professor, I read documents showing Victoria's Brown to be a different aged John Brown.

Intrigue deepens, as my mother-in-law (a Brown relative) remembers caring for a very Palagi looking Jane in 1930s Upolu.

Mae believes Jane is a daughter of Queen Victoria.

I have been informed by Mae that governments have been in communication with her and her brothers about this situation. Apparently the UK is not embracing Mae's genealogical research.

Go to the Hidden Garden, go on Mae's brother's Samoa by Foot walking tours... and draw your own conclusions.

Cool Stuff will wait this one out.

Cool Stuff, always in the mix, with cool technology, and exciting legendary folks. You may be next. We all have a story.