With Samoa allowing flights into the country for citizens stranded in N.Z and easing stay at home rules, I think America Samoa should ...
Do the same
40%
Only ease stay at home rules
11%
Keep things the way they are
49%
Total votes: 245
Home 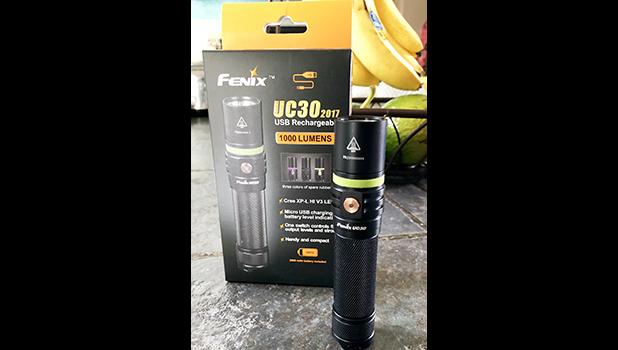 American Samoa’s Territorial Police are 24/7 on the front lines, be it traffic & law enforcement, emergency rescues, or combating the reported increasing drug trade. Cool Stuff presents our own “Police Week” salute with reviews of functional tools that will help them to protect you Coolios and possibly save their own lives.

Honorable Governor Lolo Moliga spoke with deep sincerity about Territorial Police safety as he was all too close when Mrs. Cool Stuff’s distant cousin, Detective Brown, was brutally taken from our family and your Tutuila community.

Respectfully we submit that the Fenix UC30 is our first suggestion of a valuable Police (& first responder) asset.

The UC30 has heaps more functions than presented on a late 1960’s  Vegematic TV commercial (“it slices, it dices, it purees, it washes your car, cuts your grass, takes your dog for a walk, waters your lawn”...ok, a tad bit exaggeration...but you mature Coolios remember.)

The Fenix UC30 will let you function at its lowest intensity (5 lumens) for five days nonstop!  50 lumens for one whole day nonstop. 150 lumens lasts 8 hrs 45 minutes, 350 lumens for 3 hrs 20 minutes. The UC30 is almost the size of an old fashion single function AA Maglite.

The 1,000 lumen might make all the difference in spotting a child swept off the beach or lost on a hillside, in low light, when a police officer is first on the scene.

Now that a lot of Territorial Police are armed with pistols, the Fenix UC30 gives a viable defense option instead of having to shoot a malevolent violent suspect.

While still playing football for USC, Cool Stuff Junior was talking story with his old kid-timemates at the 7/11 Store in Hauula, Hawai’i when a drug crazed looney approached me in the parking lot, and threatened to kill me reasoning in his diatribe that, “You #¥£€@!!! haole, you stole my Hawaiian lands, I’m going to kill you!”

Cool Stuff kept his Savaii cultural response restrained, looked at the store window for Trojan Football boy to save me... to no avail.  Keeping low key, Cool Stuff pulled out my old school Fenix TK 35 flashlight, put it on high, then switched to fast strobe to visually disable the psycho. Honolulu Police Officers arrived and suggested I not press charges and have them get him on meds.

On reflection, the Fenix probably saved the naughty fellow’s life. A lack of non violent alternatives can lead to somebody getting hurt... and its not going to be a well versed Coolio or a silly Cool Stuff.

If ASG doesn’t provide these in the future... its only $44 per unit, so buy your Police Officer Aunt, Uncle, Cousin, Mom, Dad, Brother or Sister one of these Fenix’s for Xmas.

The Fenix UC30 is available at City Mill, Honolulu and probably on an Amazon or ebay online store near your dancing internet shopping fingers.

Next up for Cool Stuff Police Week, Yuneec Drone stuff we learned in Las Vegas just days before the Mandalay Bay concert shooting that will have a future impact for law enforcement.